Birdman or The Unexpected Virtue of Ignorance (2015) – Flight of Fancy

Synopsis: A washed-up actor who once played an iconic superhero must overcome his ego and family trouble as he mounts a Broadway play in a bid to reclaim his past glory. 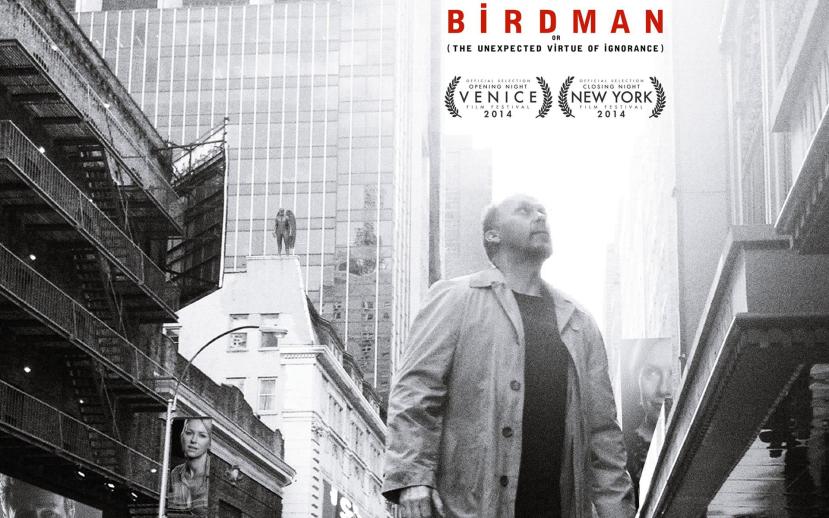 Alejandro Gonzalez Inarritu is not a film maker known for his comic sensibilities. His loosely linked trilogy of Amores Perros, 21 Grams and Babel were not rib ticklers, and nor were they meant to be. Each shared similar themes of people linked together through loss and bereavement. Loose associations thrown together in tragic serendipity. 21 Grams in particular was, for all it’s laudable performances and earnest direction, grindingly depressing at times.

Birdman is on the surface a 180 degree turn in tone and pacing from his previous works. There are more laugh out loud comic moments in Birdman than all of the three aforementioned movies. Indeed the opening scene, as the camera slowly and deliberately focuses in on half naked Riggan (Michael Keaton), levitating in an ambiguously dingy room one, one of the first lines uttered by the gravely narrator who will come to punctuate the key emotional points of Riggan’s journey is “how did we get here? It smells like balls”. If this was Judd Apatow does Birdman then it wouldn’t feel out of place. And it doesn’t feel at all out of place here, but it does immediately set a comic tone that Inarritu fans will be unfamiliar with.

Set over an undefined number of days on Broadway, Birdman can be boiled down to the story of a man terrified of being forgotten. Riggan is known and beloved for what he was; popular superhero character Birdman. But now he is desperate to be loved for who he perceives himself to be. What he wants to be. He is just looking for respect, desperate to

prove he isn’t a one trick pony. He has depth. Range. Nuance. Culture. Like many of us he is desperate not to be forgotten when he dies, the idea of being ordinary something he can’t reconcile, afflicted by a very modern form of neurotic narcissism that is amplified by the rise of social media and selfies. Riggan’s method of enticing the public to validate his ego is to write, direct and star in an adaptation of a Raymond Chandler story for broadway. Unfortunately for him the only people more self involved, neurotic and needy than him are his cast; slightly crazy, sexually liberated on-off girlfriend Laura (Andrea Riseborough); slightly less crazy, arguably more needy Broadway newcomer Lesley (Naomi Watts); and “worst actor he has ever seen” Ralph (Jeremy Shamos). When the incompetent Ralph is unceremoniously bonked on the head with a stage light during a late rehearsal, what Riggan’s lawyer and confidant Jake (Zach Galifinakis) sees as the probable death of the actor’s vanity project, Riggan sees as an opportunity to bring in a big name. A marquee signing to give his words the heft they need to appease those critics who label Riggan a cultural husk. Enter stage right Mike (Ed Norton), a whirlwind of talent, bluster, mayhem and ego. So method he makes Robert De Niro look like Miley Cyrus.

Ultimately though Birdman’s narrative and thematic complexities can not be so simply boiled down. Ambiguity is at the epicentre of Birdman’s raison d’etre and Inarritu employs an arsenal of ideas and techniques to convey Riggan’s emotional frailties. On the one hand he has created a screwball comedy of sorts that mixes equal parts Coen Brothers and Aaron Sorkin, not least due to the endless walking and talking scenes that rival anything the West Wing did. There are also shades of Robert Altman as Inarritu spends considerable time exploring Riggan through the orbiting character’s in his world, revelations often reached through reflections on their own flaws. Yet Inarritu also seamlessly juxtaposes the unflattering realities of the theatre with flashes of the supernatural. Never discussed and never explained, these moments are likely to be taken as visual metaphors for the idea that even when we may view ourselves as ordinary we actually posses extraordinary gifts that others may never recognise in us, partly because we fail to recognise them in ourselves. It’s lack of explanation allows for the viewer to fully interpret these moments in their own way, adding an additional layer of narrative complexity that is often sorely missing in modern cinema. 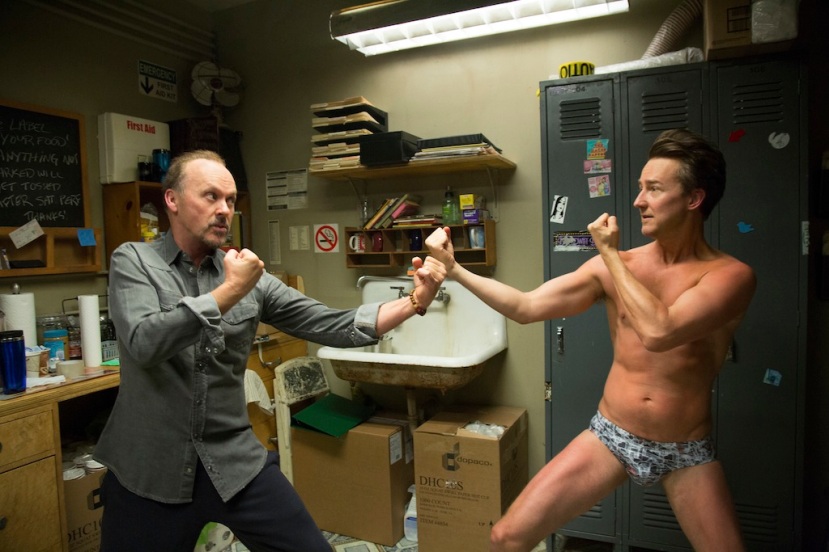 Birdman’s beating heart is the powerhouse performance from Michael Keaton who hasn’t been this good since Jackie Brown. The parallels between Keaton’s Riggan, struggling to shake the superhero character that made him a household name and Keaton’s own experience as Batman, are obvious. And I would suspect not accidental in their casting. But it’s the moments when Riggan is just a broken man trying to reconcile his own needyness while wrestling with his past mistakes that Keaton reminds us why he was one of the biggest actors on the planet for a time. Every wrinkle, every hoarsely sputtered word, every sigh, every hunch seems calculated for maximum empathetic effect. On the surface Riggan is a controlling narcissistic asshole. But deeper down he is just an insecure man looking for the love of his daughter and the respect of his peers. True, deeper down still he is no less of an assehole. But keep going a bit further and you’ll get back to the good stuff. The man is an emotional sponge cake; layered and artistically delicious.

It’s not a one man show though. Birdman is an ensemble piece. Emma Stone continues her impressive ascent with an out of character turn as Riggan’s pouty, troubled daughter/assistant who is just as needy and insecure as her father. She doesn’t have tonnes of screentime but when she does she leaves you in no doubt she can punch with the big boys, demonstrated to great effect when she dresses Riggan down on his need to be remembered. After the spitting, venomous tirade Inirratu lingers on her face for just long enough for Stone to show you why she is so highly regarded in acting circles. Edward Norton doesn’t have anything to prove to anyone about anything but it is easy to forget he is a genuinely funny man underneath that earnest tortured artistic persona. Much like his self involved character Mike, he leaves nothing behind in the dressing room when he is on camera.

The most astonishing thing about Birdman is how it feels from start to finish like one continuous scene. There are cuts but mostly through transitions in time rather than jumping from place to place. The fact that 95% of the film takes place in and around the labyrinthine theatre and surrounding locations assists in achieving this constant flow. Along with his compatriot Alfonso Cuaron, who put together one of the greatest continuous tracking shots of modern cinema in Children of Men, Inarritu manages to make the sublime seem easy. Birdman is a study in ego and how charismatic individuals impact on the lives of those they pull into their orbit. For many film makers that would have been enough to warrant a lot of static scenes. Here though Inarritu, as a man briming with confidence and passion for his art, wants it all. And he delivers on all fronts.

The key element of glueing together Birdman’s continuous flow, however, isn’t seen but heard. Antonio Sanchez’s off kilter, largely unaccompanied jazz drum score plays a fundamental part in bridging the gaps between text and subtext and giving Birdman it’s unique pacing. What is a criminal shame, as covered in a number of publications in recent weeks, is that it is not eligible for Oscar consideration on the basis that it is accompanied by roughly 17 minutes of pre-recorded classical music. Thus ruling it out of contention despite winning best soundtrack at Venice and is likely to pick up a similar award at the Golden Globes. Another example of why the Oscars are an overblown and count for nothing except the future earning power of those who are nominated and win.

Conclusion: Compelling, funny, dramatic, innovative and highly original. The film of 2015 may have landed on the first day of the year. See it immediately and then see it again. And again.