One of our first trips of 2014 to the cinema was to see David O Russell’s hyper stylish 1970’s set crime thriller, and it was almost one of the most unashamedly entertaining. At times narratively flawed and as flabby as Christian Bale’s Irving Rosenfeld, any cracks were easily painted over by Russell’s ensemble cast all on top of their game, and a script that had more laugh out loud moments than 90% of straight up comedies released this year. Jennifer Lawrence is probably the least utilised of the leading cast members, but as is generally the way when she is on screen it literally smolders from the heat of her performance. The running joke between Bradley Cooper and Louis C.K.’s FBI superior is worth the ticket price alone. 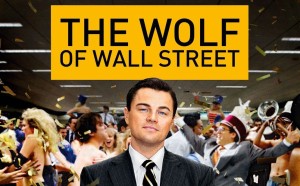 This tale of Wall Street rags to riches, to slightly less riches due to the fact most of the original riches were concealed offshore and then probably back to more riches if you believe the papers would probably have been more fitting in 2008 when the world was consumed with banker-centric hatred. In 2014 though Scorsese still managed to blow the eyebrows of off the conservative press with his 3 hour long freight train of debauchery, sex, drugs and general money fuelled shenanigans. The cocaine train was driven at full pelt by a bile spewing, money grabbing, midget throwing, ethical black hole of performance by Leonardo Di Caprio who continues to be one of the most compelling actors of his generation, taking that title from Johnny Depp who has gone off the boil in recent years. Matthew McConaughey could have gotten an Oscar nomination for the 10 minutes he was on screen. Don’t take your grandma. 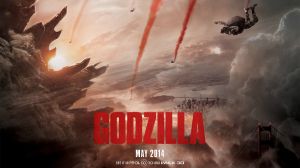 Probably the most divisive blockbuster of 2014, I left the cinema in love with Godzilla for many of the reasons a lot people left feeling disappointed. The human characters were there for exposition only with the emotional weight of the movie carried by the empathetic enormolizard and his giant flying nemeses. Gareth Edwards brought similar themes from his fantastic debut Monsters to Godzilla, with the trio of ancient creatures fighting for the basic instinct of survival and pro-creation amongst the man made structures we have built in honor of ourselves. The destruction of cities is not because of humans rather in spite of humans, our arrogance and frailty exposed in equal measures as the behemoth dinosaurs scrap with devastating consequence while we try in vein not to get squished. The final battle scenes in San Francisco were more impactful and engaging than the similar levels of destruction wrought at the end of Man of Steel and certainly more organic. Hopefully our unlikely saviour will return in June 2018.

Spike Jonze doesn’t make many movies but when he does he has a style of melancholic introspection few of his peers could hope to create with the exception of Charlie Kauffman. The pairing of those two on the brilliant if uncomfortably neurotic Adaptation was probably in need of a little lighthearted balance. Which is why Her feels like Jonze growing up. Equal parts heartbreaking and at times laugh out loud funny, it’s biggest achievment is delivering sentiment without ever falling into schmaltz. With only one of it’s leads on screen it also gets a stunning vocal performance out of Scarlett Johannson as the operating system Joaquin Phoenix falls in love with. Jonze explores some huge themes about loneliness, the base nature of love and companionship, monogamy and the future of sentient artificial intelligence. Yet it never feels overtly sci-fi as you are drawn entirely into the gentle love affair between a man and his computer. Jonze also delivers my most perfect end to a movie this year. Well done that man.

Another film that explores some big modern themes is Nightcrawler, albeit this time wrapped up in a jet black psychological thriller. Jake Gyllenhaal delivers a brilliantly disconcerting and unnerving performance that is a guaranteed to be overlooked come Oscar time. Dan Gilroy’s thriller is one part Network one part American Psycho as Gyllenhaal’s Lou Bloom finds his sociopathic lack of empathy and destructive self determination to become respected is a perfect combination for a new career as a freelance news camera man. Better known as a nightcrawler, scanning the airwaves of LA nights listening for car wrecks, gunshots and all manner of tragedies in the hopes of getting some primo footage to sell to the local news station. The recipient end of this morally dubious partnership is Renee Russo in a career highlight, putting aside any journalistic ethics in a bid to win ratings and keep her job. While Gyllenhaal will rightfully take the plaudits it is all too easy to overlook Riz Ahmed in a breakout performance as Bloom’s put upon assistant/partner/dogsbody/psychological punching bag.

Michael B Jordan announced himself as a serious talent in 2014 with a captivating performance in Ryan Coogler’s heartbreaking retelling of the final hours of Oscar Grant III, a 22 year old man gunned down by BART officers as he came back from a NYE party with his friends and girlfriend in 2008. Coogler is careful not to paint Grant as a saint, showing the temper he struggled with and the street level criminality he mixed in. But he also demonstrated that these choices were often in a bid to put food in his daughter’s mouth and gas in his car. He was a young man trying to turn his life around, devoted to his young daughter and loved by many. The final act is almost to much to bear at times as you know what it is building to. Coogler chooses to open Fruitvale Station with actual footage of the shooting. When the film comes full circle it will leave you for a long time after the credits

5. Guardians of the Galaxy

There is no arguing that 2014 was the year of the Pratt, with Guardians of the Galaxy marking his second entry in our top films of 2014. Much has been made, including here, of the impending over saturation of the super hero movie market. With the likes of DC and Marvel announcing multi-phased releases of new and existing franchise releases up to 2020 you wonder how long the appetite can maintain the kind of returns the studios have come to expect in recent years. Guardians of the Galaxy was one that many critics suspiciously looked at as Hollywood’s shark jumping moment. A niche comic book with a ragtag band of anti-heroes and a marketing campaign that didn’t do much to increase expectation. What we got though was the most refreshing comic book movie since Iron Man, full of glorious colour, wit and invention and a Chris Pratt performance that was equal parts Han Solo, Indiana Jones and Andy from Parks & Recreations. Hopefully James Gunn will retain directorial duties on the remaining entries in the franchise.

David Fincher’s faithful adaptation of Gillian Flynn’s thriller novel probably drew as many column inches from the British press on the argument of whether it was or wasn’t misogynistic as it did dollars at the box office. Whatever your stance on it’s themes there was no getting away from the fact that it was another masterclass in uber-stylish film making from Fincher and a captivating thriller from start to finish. For those of us that went in unaware of it’s many twists and turns it also contained some genuine wow moments as Fincher constantly challenged his audience to evaluate their opinions on Ben Affleck’s central protagonist/antagonist Nick Dunne. It will be Rosamund Pike who is likely to gain the plaudits come February/March time though with her outstanding performance as his missing wife Amy, and one that put her in the company of Emily Blunt and Andrea Riseborough for young British actresses dominating Hollywood.

Everything was indeed awesome in February as Phil Lord and Chris Miller delivered the straight out comedy of the year. Seen by some, with some understanding, as a cynical 90 minute product placement when it was first announced, no one could be left in doubt after seeing it that the Lego Movie was love letter to a toy responsible for developing the imaginations of millions of children and adults for the last 30 or so years. Chris Pratt (again) was perfectly cast as the hyper energetic, super optimistic generic (in the purest sense of the word) Lego man who lives by the strict rules of President Business, until his world is thrown into chaos by a group of renegade figures determined on restoring creativity to their world. Featuring a great voice cast of comedian and thespians alike, and a thousand jokes a minute I defy anyone to feel instantly better about life when the last third plays out without any sense of schmaltz.

Christopher Nolan must have made a deal 15 years ago with some shady guy in a trilby hat and a briefcase containing a mysterious bright light. It’s the only explanation I can think of to account for his continued of cinematic output. Interstellar may not be Nolan’s finest work (I think that is a tie between The Prestige and Inception), and it is certainly narratively flawed in the final third. Yet for these criticisms Interstellar delivered some of the purest cinema I have seen in my years. Nolan understands the power that film has to push our empathetic boundaries and he uses every opportunity he can to use the overpowering expanse of space combined with themes of separation, family and our need to feel a part of something more than ourselves to devastating effect. At it’s core is yet another performance from Matthew McConaughey which further separates him from his rom-com dark days and again establishes him as one of the greatest actors working today.

We covered Frank in great detail in our review here. So in placing Lenny Abrahamson’s comedy masterpiece we will merely say that it was the best two hours I have spent in 2014 doing anything.