Synopsis: With his wife’s disappearance having become the focus of an intense media circus, a man sees the spotlight turned on him when it’s suspected that he may not be innocent 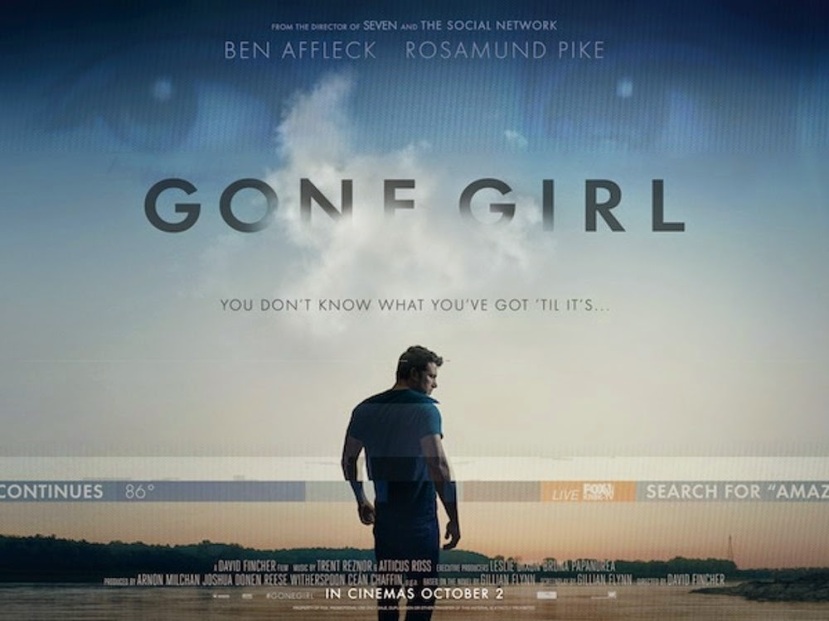 Every great director has a tell, a style that is quintessentially them. Maybe not a USP but at the very least something that immediately distinguishes them from their peers. You can immediately spot a Quentin Tarantino effort based on the quick smart dialogue, blood loss and heavy pop culture references. Or a Michael Bay film by the degree of lobotomisation you have to endure before sitting through one. Gone Girl, adapted from the bestselling novel of the same name, is David Fincher from the first shot to the last shot. Which, I should point out for clarity, are the same. So maybe from the first shot to second to last shot would be more accurate. Either way, Fincher’s immaculate finger prints are all over what must surely be an early runner for Oscar contention come February 2015.

This is post Panic Room Fincher at his absolute best. Since the underrated Jodie Foster thriller, Fincher has turned to gold almost everything that has come into his view (Benjamin Snooze Button accounts for the caveat). Zodiac remains one of my favourite films of the last 10 years and my favourite Fincher movie since Fight Club. But it is ever since The Social Network where he managed to turn the subject of Silicon Valley lawsuits about intellectual property into a genuinely thrilling and engaging film, that Fincher has developed his beautifully polished upmarket Scandinavian furniture catalogue aesthetic. His most recent efforts The Girl With The Dragon Tattoo, appropriately set in Scandinavia, and Netflix original series House of Cards, are set designed to within an inch of their lives with granite surfaces, clean lines and pure light. A million miles away from the dirty, sweaty, sleazy aesthetics of his earlier work like Se7en, Fight Club and Alien3, it is the mark of a director who has transcended their pop video roots and pushed that natural flair for mis-en-scene into the bourgeois circles they now move in. When it comes to MTV brats making the leap he is the anti-Michael Bay.

If Fincher’s tone is definable by his Ikea aesthetics then his themes are very much rooted in the exploration of the American upper-middle class charade, and the Machiavellian nature of the characters that litter its manicured lawns and poorly constructed McMansions. Gone Girl gives Fincher his best opportunity yet to explore these ideas. Set in the heart of middle America, Gone Girl starts as a mystery thriller centred around the disappearance of Amy Dunne (Rosamund Pike), a beautiful, intelligent and seemingly well adjusted woman who was the subject of a series of very popular children’s books when she was a child. She quickly becomes America’s sweetheart, instantly appealing as her soft features and piercing blue eyes adorn billboards and hours and hours of cable news programming. She is an angel. An innocent victim of an as yet to be determined crime.

Every good story needs a villain though. In the absence of any real evidence the media and local Police Department conspire to build a case against Amy’s lazy, disengaged, smug and dislikable husband Nick (Ben Affleck). Before a body is found or a crime proved Nick is tried and convicted in the court of public opinion, the local detectives convinced by a weight of very circumstantial and at times outright convenient evidence that Nick has bumped her off for a quick life insurance payout. The only person who stays with him through the whole ordeal is his twin sister and resident Amy hater, Margo (Carrie Coon). Fincher spends the first hour or so constructing an impeccably shot, beautifully paced and tense who-dunnit, complete with red herrings and subtle hints as to what is to come, with the Dunne’s 7 year relationship built up and then masterfully deconstructed by way of Amy’s narrated flashbacks, seemingly from beyond the grave. 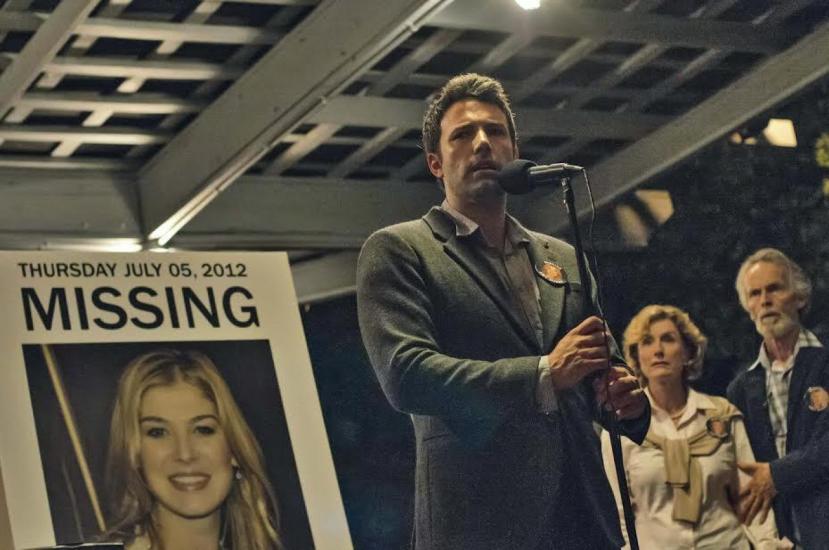 Then somewhere around the hour mark everything changes and Gone Girl’s identity becomes as schizophrenic and well managed as Amy Dunne is revealed to be. It is a jarring transition that on first viewing left me completely discombobulated for a few minutes as I was asked to realign my sympathies and get my head around whether Amy’s explanation for her whereabouts was leading the film in a direction I could not have foreseen. Fincher takes his angelic victim and reveals her to be one of the most iconic femme fatale since Fatal Attraction’s Alex Forrest. In fact one beautifully framed shot in the final 20 or so minutes conjures memories of the famous bunny boiling. A smiling siren. An innocent and poorly placed beloved cat. A boiling pan. A knife. All framed within an immaculately expensive kitchen.

For all the fawning over Fincher’s directing abilities it really is the strength of the cast that raises Gone Girl above and beyond. Rosamund Pike deserves and Oscar nomination for her performance as Amy. She is a shark in Chanel, and plays it note perfect from start to finish, morphing Amy from a saint to a monster with consummate ease. Affleck plays smug yet loveable which shouldn’t be too much of a stretch for him, with Carrie Coon matching the A list man of the moment as his foul mouthed and straight talking twin sister.

I feel like I could sit and write blow by blow dissections of each scene as the film twists and turns, peeling back the terrifying layers of Amy’s psyche. Fincher using his characters circumstances to explore the modern phenomenon of mass consumer debt as we are all encouraged to be someone else, that transformation achieved only through buying more and more expensive items we can’t afford. Status can never come at too high a price. And in the end, for all her convoluted and devastating scheming to exact revenge on those she feels have done her wrong, Amy Dunne in her own mind just wants the world to see her a certain way. Perfect. Greater than the sum of her parts. And with a husband who can play his part without question.

Conclusion: Hitchcock would have been proud to make a MacGuffin masterpiece of this quality