Five people of seemingly differing levels of influence within the increasingly socially relevant media behemoth are collected around a large glass table. Two are in suits of impeccable quality, not a stitch out of place. These are the Money Men. The rest are dressed in clothes that look like they came from a thrift store but cost the same as a new Ford Focus. These are the Creatives. Two look like they belong. The third tries to keep up a hackysack with concerning levels of concentration for a man with stock options.

Creative #2: You’re right Steven. We need a cartoon. Fox has Family Guy and The Simpsons. Comedy Central has South Park. That’s our next move.

Creative #1: That’s all well and good Brian, but it’s been done already. Does America really need another foul mouthed comedy about dysfunctional families intersplised with witty social commentary on the disposable nature of modern culture and how really we are all just alone trying to find a firm rock to cling too as we fall helplessly down the cliff face of life into the endless black hole of loneliness?

Creative #2: You ok there buddy?

Creative #2: Well….maybe you should lay off the scotch at breakfast while we get this idea off the ground.

Creative #2: You’re right Steven, we could do a satire on modern celebrity culture. Make it about a washed up 90’s sitcom star. Like looking ten years into the future from now about Charlie Sheen except it wont be about a guy who’s been dead for 5 years…

Creative #2: …We just need a hook. A gimmick. Something to set it apart from the rest

Creative #1: That’s both terrible and a little racist, Geoff. I expected better from you

Creative #2: What if the main character is a horse who starred in a sitcom called Horsing Around and he is now washed up holding on to the one good thing he had?

Creative #2: Lets not get into who has smoked what this morning, Craig.

Creative #1: No, wait that’s genius. But lets not make it as straightforward as everyone being animals. Some will be animals but with human appendages. And none of the humans will make reference to the fact there are animals talking and being people.

Creative #2: Like a Navy Seal that is an ACTUAL seal?

Creative #1: Jesus Geoff, is everything that comes out your mouth today a racial slur?

Creative #2: We got ourselves a hit people

Creative #3: I dropped my hackysack

Creative #2: Yeah, no one cares Kevin

What you just read (or probably skipped over most likely) was how I imagine the meeting to greenlight Netflix’s latest triumph of original programming, BoJack Horseman, went. The ever more influential and powerful media company’s latest foray into original programming is an adult cartoon which has the look and feel of an Adult Swim offering with the A-List cast of an HBO primetime comedy. Written and created by relatively unknown writer Raphael Bob-Waskberg and illustrated by Lisa Hanawalt, it is an exquisitely surreal take on modern celebrity culture. And another example of the power of Netflix that they could risk so much money on such a unique product from two relatively unknown creators and put the full weight of Hollywood talent like lead vocal actors Will Arnett, Aaron Paul and Alison Brie, as well as supporting cast like Seth Rogen, Naomi Watts, JK Simmons and Angelica Huston, behind it.

Unlike it’s network rivals, the Netflix mass release platform, where entire seasons are made available in one go, gives BoJack Horseman the opportunity to play out as a 12 episode storyline more akin to live action network shows, rather than the loosely related episodic nature of Family Guy or The Simpsons. They not only understand the change in the way people want to access their content but they are actively changing our attitudes towards towards how we devour it. Streaming services identified the inherent impatience in modern viewers who have no time to wait 23 weeks to get to the point. Our decreasing attention spans mean that we are less inclined to retain small details in one episode that seem innocuous but may serve the greater story in a reveal ten episodes later. Streaming and binge watching has changed all that as viewers take in 4 or 6 episodes at a time or watch an entire season in a weekend. It has meant that writers and producers have been able to tailor the way they set their emotional arcs. Arrested Development was a prime example of this. Well aware of how people would consume the Netflix backed fourth season, Jim Brandon (Head Writer in place of Mitch Hurwitz) created a far more complex and intricate storyline relying on small payoffs throughout the 15 episodes that, had it been released through weekly episodes, would never have worked. 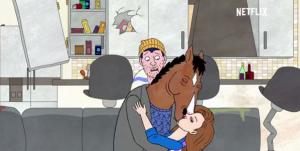 BoJack Horseman, while nowhere near as complex or intricate, uses this same method to create a single story over the 12 episodes that if watched in one or two sittings pays dividends. It is a far more enriching viewing experience than is realistically deserved from a sarcastic cartoon about a self involved anthropomorphic horse, his loser roommate/lodger/freeloader (Aaron Paul), the woman assigned to write a warts and all biography of him (Alison Brie), her needy and dimwitted TV star Golden Retriever boyfriend Mr Peanut Butter (Paul Tompkins) and BoJack’s on again/off again girlfriend/agent/fixer/cat Princess Carolyn (Amy Sedaris). Gravelly larynxed funnyman Will Arnett voices the title character and brings his trademark smug, self involved, arrogant delivery to the washed up, equine, former sitcom star. As fans of Arrested Development will know though, Arnett’s talent stretches to more than just witty hubris. When needed he can inject the required pathos and self pity required to flesh out the sort of spoiled and deluded characters he is so well suited to. Aaron Paul, in danger of being typecast as loveable losers, voices BoJack’s well meaning and loveable loser roommate and showcases his natural comic timing that was evident in dark flashes in his career defining role as Jesse Pinkman in Breaking Bad.

Lets be clear though. While it may be a wonderfully relevant satire it hasn’t set a new standard for adult cartoons. It is genre which has exploded in the last 15 years and is now heavily saturated with institutions like The Simpsons, Family Guy, American Dad and South Park as well as a raft of smaller, and arguably much funnier, smaller titles like Bob’s Burgers, Venture Bros, Metalapocalypse and Archer. What BoJack Horseman lacks in the originality of it’s format it makes up for by not being afraid to hit some heavy emotional points to close episodes. At it’s core it is a show about any number of celebrities or average Americans who get through life by self medicating and fucking anything that will provide a fleeting moment of validation. The show’s controlling minds recognise the shows dark conceit and don’t shy away from letting some sobering moments sink in when others would go for laughs in fear of alienating their audience who want to see a funny horseman make jokes about Andrew Garfield liking lasagna and hating Mondays.

For all that has and will be written about it’s cynical centre, BoJack Horseman is a comedy and it is in this area that it succeeds with aplomb. Smart, funny and littered with the kind of cutaways that Family Guy once did so brilliantly in it’s earlier seasons, it is a confident first set of episodes, not afraid to poke a stiff finger in the ribs of the industry that financed it’s very being. The writers also make great use of the anthropomorphic mix  with some genius use of the animals that make up the share of the world. It’s often blink and you’ll miss it like the cockerel on a bicycle shouting GOOD MORNING IT’S TIME TO GET UP during an establishing shot of BoJack’s house. Or Mr peanut Butter’s ongoing battle with the postman.

The greatest thing I can say about it though is that as the final scene came to a wonderfully poignant close I had a sinking feeling born from the realisation that there were no more episodes. And given that I had watched all 12 within 24 hours of their release it would be a good 9 months to a year before I would see any more. Such is the trade off for the immediacy of a full season release. I just hope it can build on it’s strong first season and attract an even stronger writer’s room for the second.