Synopsis: A bipolar, bigoted junkie cop manipulates and hallucinates his way through the festive season in a bid to secure promotion to impress his wife and daughter

Without even knowing the details about Filth there are enough clues for you to know that it’s not going to be easy. Based on the Irvine Welsh novel of the same name and run on a marketing campaign of James McAvoy face down in a giant line of cocaine, it’s evident this is not a Dickson of Dock Green reboot.

I also knew that this was touted as another in a line of challenging roles taken on by the increasingly enigmatic James McAvoy. However, even with that knowledge at my disposal I was unprepared for just how brilliantly a depraved, dirty, scummy, repugnant 97 minutes of cinema I was settling into. And at the heart of it a performance from McAvoy that will make you want to shower in bleach when you leave. It has future cult movie written all over it. 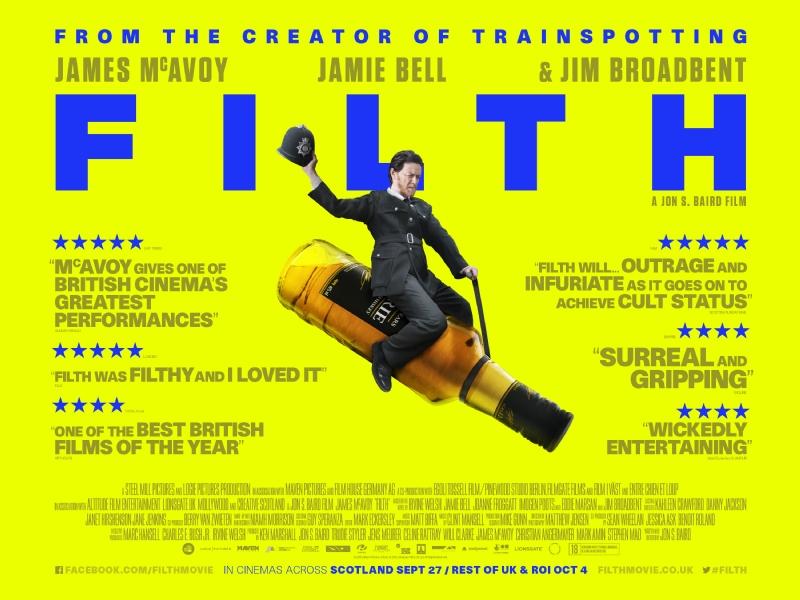 James McAvoy’s performance as Edinburgh Police Detective Sergeant Bruce Robertson, a man devoid of humanity in pursuit of his own ambitions, makes Harvey Keitel’s Bad Lieutenant look like Columbo. One of a number of officers battling for one promotion spot to Detective Inspector, Robertson’s sole ambition is not just to win by any means necessary. He wants to humiliate, break and destroy the colleagues around him that he considers to be unworthy of breathing his air. His arrogance knows no limits.

When we are introduced to Robertson, walking through Edinburgh smoking, brow furrowed, talking with no lack of irony about the wonderful people of Scotland, he steals a child’s balloon before firing a double bird at him. This is possibly the least repugnant thing that Robertson does for the next 90 minutes as he drinks, smokes, snorts, cheats, wanks and manipulates his way to a likely nervous breakdown. All the while spewing bigotry, misogyny and homophobia at anyone unfortunate enough to fall within ear shot. Taggart he is not. It is all for something though; his beautiful wife Carol (Shauna McDonald), a woman he can’t help but think of while his colleagues wife straddles him and chokes him with a cable during his orgasm. Touching.

It’s remarkable in that as a character he starts off dislikeable and arrogant before becoming consistently more repulsive, rarely showing any glimpse of humanity or empathy. There is a point early on during a raid with his colleague (Jamie Bell) where Robertson controls a situation, during which you constantly wait for him to walk up to the line and pull back. When he doesn’t you know that this is not a character from whom you should expect quick redemption.

In giving the World DS Bruce Robertson McAvoy leaves nothing of himself behind in bringing one of the most unlikable central characters in recent memory to life. It is as brave, raw and exhausting a performance that I have seen since Michael Fassbender in Shame. And while Filth will divide opinion and offend with it’s conveyor belt of depravity, just as Shame did, no one should be in any disagreement about McAvoy’s performance as Robertson. It deserves awards that I hope at least some of the smaller festivals and organisations such as BAFTA recognise even if it will never bother the big American awards.

Filth boasts a fine supporting cast of British talent to act as targets for McAvoy’s bile spewing Machiavellian nightmare of a man, including Jim Broadbent in a surreal role as his giant headed Australian shrink, Imogen Poots, Jamie Bell and Shirley Henderson. It’s Eddie Marsan as his easily led and unwitting best friend/patsy Bladesey who provides some much needed comic relief to the dark void of a heart that beats at the center of the film. He is essentially the same character Marsan played in The Worlds End, except in a much much much better film.

At the end of it all the movie is a triumph of cynicism and sleaze that will leave you feeling in need of a strong drink and a hot shower. It is not enjoyable, certainly not in the common sense of the word. But it is entertaining in so much as you can’t help but wonder how Robertson can sink any lower. Before being shocked when he does. Again and again.

And at it’s dark heart is a central performance from McAvoy that will go down as a future cult classic. He is fast cementing himself along with Fassbender as one of the most courageous and diverse actors of his generation.

Conclusion: Hard to watch but difficult to turn away. You may be offended, repulsed, nauseated and depressed by the end but you will never be less than engaged. Also, the World’s worst recruitment campaign for the Police.