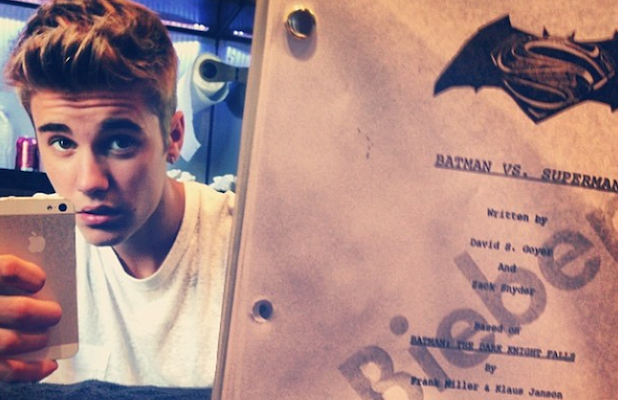 On 4th March 1933 when FDR addressed a broken and desolate American nation, reeling from the Wall Street crash, Great Depression and Dust Bowl and uttered the words “We have nothing to fear but fear itself” he was right. Until today. Because had he made that speech on 14th September 2013 I am fairly certain he would have probably amended it to “We have nothing to fear but fear itself……and Justin Bieber in a Superman vs Batman movie”.

Yes as the above picture posted by the self involved, narcissitic, deluded, spoilt, mildly talented Canadian twonk clearly suggests, he has been given a personalised script for the upcoming Batman vs Superman: Man of Steel 2. WTF?!?!? And his comment that accompanied the photo on his Instagram feed was “Robin??”. Oh, good God NO!!

Congratulations Snyder and Co! If you have in fact allowed Bieber to be anywhere near your movie then you just lost any scrap of credibility you had. Man of Steel was divisive. You created an internet shit storm casting Ben Affleck as Batman (a decision I am behind 100%). And now this?!? Are you trying to make this Batman & Robin? Why not cast Dolph Lundgren as well, give him some zany one liners and throw the fucking towel in.

Now I am not one for over-sensitive, geek driven, internet hyperbole. But there comes a time when a decision is so unbelievably stupid it deserves some vitriol. And before all you Bieberites or whatever you call yourselves come charging like a pre-teen cavalcade to the defense of his potential acting ability; let me add this. I don’t care if he can act. I don’t care if he’s the next Marky Mark Whalberg!! His presence is a distraction to a production already struggling to keep fans onside. We all know Miley Cyrus can act. By which I mean we have seen her perform the act of acting. Her ability to act is questionable. My point being though, if Miley Cyrus were anywhere near this thing I would be equally as outraged. And before anyone regurgitates the whole “well look at these previous questionable castings that turned out pretty sweet” articles that flew around after the Batfleck unveiling. That argument does not apply here. It worked then. This is a whole different bag of oranges right here.

Given I am currently laid up in pain with a bad leg and I have had far to much coffee for a man with no mobility to burn it off, I could vent on this for hours. So let me just conclude by saying this:

This photo might mean nothing. It might be a storm in a tea cup. Given Bieber’s quick descent into Michael Jackson style bonkers celebrity shenanigans recently, this might be a big prank. And if it is then I am as big a fool as anyone for biting. But, if it’s not. If this is real and Bieber is anywhere near this thing then one thing is abundantly clear. Snyder and co give not one shit about the fans. Because all this reeks of is a Michael Bay style desparate attempt at getting bums on seats regardless of the potential impact on the quality of the output.

I will take as much of a hammering as Bieber fans want to give me. Or if people want to tell me to stop overreacting before I see the final product then that’s fine. But this makes Ben Affleck’s casting look like a fucking grade A genius move in comparison.