Synopsis: Terrorists attack the White House, with REMARKABLE ease. Gerard Butler goes on a one man mission to stop them; refuses to wear a vest.

Have you ever watched a well meaning, if somewhat slow, puppy try and copy the actions of a bigger and more well rounded dog? You feel bad because the puppy can’t quite grasp the mechanics of it. It flops around without any grace and is generally clumsy. You should feel bad for the puppy, but at the end of the day he’s having a blast and so it is inevitably entertaining. You’re happy, the dogs happy. Everyone wins. 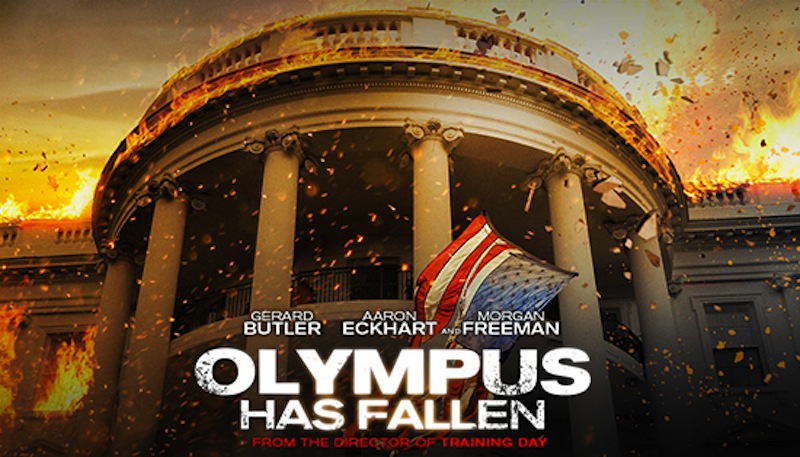 Now imagine Die Hard is a well rounded and composed 8 year old Golden Retriever; full of dignity, grace and poise. And Olympus Has Fallen is a clumsy 3 month old Cocker Spaniel trying desperately to copy him; succeeding only to emulate his graceful movements with large, clumsy ones. But, my oh my, does he have fun doing it. And you have fun watching it as a result.

I heard a lot of talk when Olympus Has Fallen came out that it was Die Hard in the White House. At the time it felt like a lazy soundbite. There is only one Die Hard. It’s called Die Hard. Having now watched Olympus Has Fallen, it kind of is Die Hard in the White House, but only in as much as they are both movies where terrorists take over a building and one man finds himself pitted against them. It is like saying Hershey’s and Lindt chocolate are the same. They are the same in so much as they belong in the same food group and are both wrapped in foil. But one tastes like gritty brown sand, whereas the other tastes like….well, good chocolate.

However, this is not the time nor the place to dive in to the minutia of why Die Hard is one of the most brilliantly well written, acted and executed action movies of all time. And while Olympus Has Fallen is dumb with a Hollywood sign sized D, has plot points that make literally no sense, with a leading man who is a pale comparison to 1988 Bruce Willis….God damn if I didn’t have fun watching it.

That’s not to say it is a good film. Far from it. It is in fact terrible, really. For instance, one abridged sequence can be broken down (with a scarily little amount of abridging) thusly:

Acting President Morgan Freeman: Calm down everyone. I’m Morgan Freeman. Everything will be fine. This is not the first time I’ve been President in a crisis. Remember that time when I was President and the asteroid hit? Oh……….scratch that. Bad example. Now, what do we know about this terrorist guy?

Important looking CIA Guy: Nothing. he’s not showing up on our lists. The CIA is running facial recognition software and all our spies are doing cool spy shit. This guy is totally unknown.

Gerard Butler: I’ve got something. I stabbed a guy and he told me the dude’s name. Like, no amount of resistance. It was remarkable really. The leader who has managed to get into the US President’s secret high security bunker as the adviser to the South Korean Prime Minister is called Kang.

Gerard Butler: No, Kang. With a G. For Gerard.

Important Looking CIA Guy: Wait let me put his name in here……………..OH MY GOD HE IS ONE OF THE MOST WANTED TERRORISTS ON THE PLANET!!!!!!!

Everyone else everywhere else: Really, dude? Really? 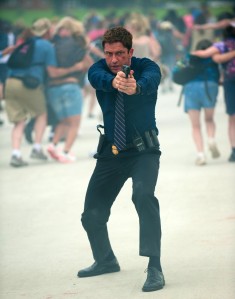 Fine I may have taken some artistic liberty with the subtext, but you get the idea. I am happy to take leaps of faith with plot points. Fill in the occasional blank. But when the opening assault begins with a heavily armed US Air Force Hercules plane piloted by two North Koreans turning up over Washington, with no explanation of how they commandeered it, I struggle. Give me something. Even just some establish shots of some shot Air Force guys and someone taking their badges or something. I don’t know. But the logistics of that whole scenario defy belief. Similarly the assault on the White House itself defies logic in the most part. The sheer volume of equipment brought to town by the terrorists is astonishing. The movie suggests that the US intelligence community is inept at best, or criminally negligent at worst. I refuse to discuss the actual workings of the US intelligence community, but regardless of your own thoughts I am fairly certain they would get some chatter about this.

At the end of it all though, Olympus Has Fallen is not about sense. It’s not about reason. It’s not even about coherent storytelling. It’s about blowing stuff up, watching Gerard Butler mumble his way through with a terrible American accent and people getting stabbed in the leg/neck/head area. And in that it delivers in heavily armed garbage truck loads. Despite it’s absurdity the opening assault on Washington is astonishingly destructive, and goes on for a while. But unlike, say, Man of Steel, it never felt drawn out or boring. Equally the movie, at 120 minutes, breezed by. I was happy to see it come in bang on 2 hours rather than 2 hours 30 which seems to be the overlong standard nowadays for big budget action movies.

The sheer joy at which Antoine Fuqua blew stuff up, gunned things down and generally hammed his way through was infectious. Admittedly most of the fun came from me and the wife laughing at the absurdity of some of the writing, but most of it came from the action and Butler’s valiant effort at appearing to be an engaging screen presence. Aaron Eckhart though was criminally wasted as the President. I spent most of the time he was on screen trying to work out the cubic volume of his chin dimple. Turns out I’m not that good at math.

I am going to watch Whitehouse Down for comparison if nothing else, and because I like Channing Tatum and Jamie Foxx more than Gerard Butler or Aaron Eckhart. I don’t doubt it will be terrible. But really I just want to know which one is Armageddon and which one is Deep Impact. Or whether they are actually both Deep Impact.

Conclusion: Dumb. So dumb. But so much fun. Just no one tell me it is Die Hard in the White House again, please.