Synopsis: An A.T.F. agent, investigating a massive bombing on a New Orleans ferry, travels back in time to save a woman from being murdered, falling in love with her in the process.

In order to facilitate my rant I have not concerned myself with spoiling Deja Vu. If you’re really that bothered about seeing the movie untainted then don’t read on. But honestly, you’re not missing anything. 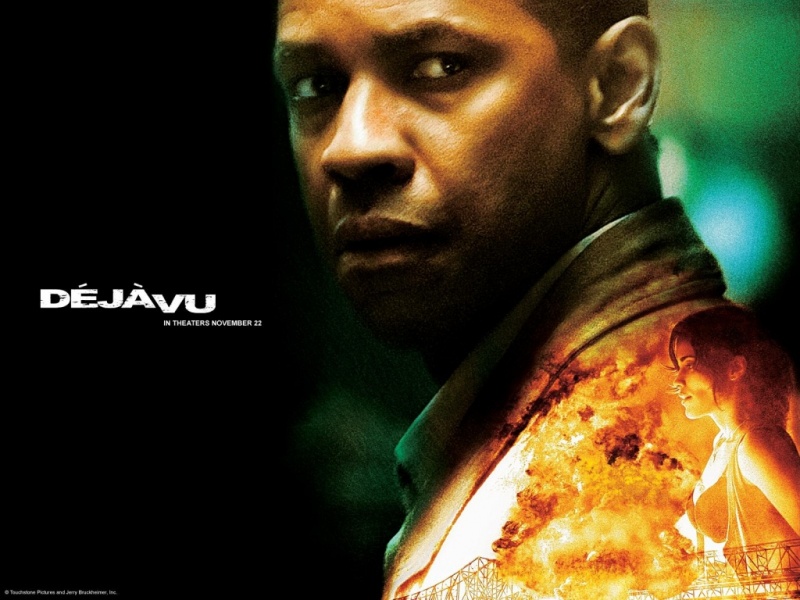 Time travel is a theoretical nightmare for physicists and very real nightmare for Hollywood scriptwriters. It is the paradox of being the most open ended narrative tool that allows you to move your story in any direction, whilst being simultaneously incredibly restraining by the innumerable contradictory properties of the theory itself. That hasn’t stopped it being the go to sci-fi screenwriting tool though, with mixed effects. For every Looper there is a Time Cop (admittedly I love Time Cop, but that doesn’t make it a good time travel movie). For every Back To The Future there is a Black Knight.

And for Source Code, Duncan Jones’s brilliant 2011 time leaping crime solving actioner, there is Deja Vu. Another Tony Scott/Denzel Washington team up that treats the science of time travel, and general narrative sense, with a wave of the hand and purse of the lips. What starts out as an interesting who-blew-it-up thriller where Denzel’s ATF Agent Doug Carlin tries to track down the man behind the bombing of a passenger ferry, quickly takes a turn into stupid-science town by way of a distracting murder enquiry. Accompanied by Val Kilmer’s FBI Agent and Adam Goldberg’s zany Dr (who looks like he just walked out of an Argo party) Washington seems to sleepwalk through what is the dullest time travel thriller I have seen in years eventually flatulating to a really dumb ending.

The main issue is that Tony Scott seemed so busy flying past things in his helicamera that he was distracted to the black hole sized plot holes. Or the fact that the audience is treated like a bunch of kids who wont ask the most basic questions about the science. Or the cardboard cut out characters that make up the science team. For instance one particular scene can be abridged as follows:

Washington: Can you send a man back in time?

Dr Science Guy: No. It can’t be done!! For all these pseudo-science reasons I am currently relaying it can’t be done. You’d be killed. More science. It’s impossible.

Washinton: But I want to go back in time.

Dr Science Guy: No! You’re heart would stop from an EMP crossing the gooblegobble bridge or some shit that the writer just made up after watching the Sci-fi Channel. Do you not think that with all of the once in a generation minds that worked on this technology that we didn’t think of every possible situation and equation to send a man back in time? Do you not think, non-Physicist ATF Agent Carlin, that if we could think of a way of sending a man back in time, giving us the most incredibly powerful tool ever constructed by man, possible of changing world events for the better, THAT WE WOULDN’T HAVE DONE IT?!?!?

Washington: What about sending me back to a hospital and writing a note on my chest in marker pen saying “revive me”? Did you think of that?

Or this abridged moment:

Agent Fat Kilmer: What about the helmet thingy that somehow remotely bends space and time with apparently no need for explanation. Chase him wearing that.

Dr Science Guy: No, the only person who can wear it, THE ONLY PERSON, is that fat geeky guy over there and he is otherwise indisposed doing something else.

Washington: (already running out of the door) I’ll do it.

Dr Science Guy: Yeah or he can wear it. Sorry when I said the only person who could wear it was this guy, I meant him or literally anyone else who has received no formal or even informal training.

And these were the better moments. Even in the non-science moments the screenwriters and Scott seemed to take a leave from sense or reason. Like at one moment where Washington is racing against time (irony) and someone rightfully says “Shall we call the Police?” to which he says “No we haven’t got time (irony again). We only have one hour forty minutes to stop him”.

Firstly when you’re chasing a terrorist and you know where and when he will strike, as well as who he is, what he looks like and WHAT HE IS DRIVING, then one call to the FBI, Police or fucking Meter Maid will get people moving in less than an hour. Put it this way, you’re not going to lose anything by making that call, particularly when you are an ATF AGENT WHOM PEOPLE WILL LISTEN TO!!!! None of that would matter as much though if after saying that he didn’t then stop off to change his shirt and get cleaned up….. Oh you’ve got time to make yourself look nice but not make a phone call to warn people that someone is about to commit a mass atrocity? Dummmmmmmmmmmb.

Also, and I know it is an action movie so it is kind of a given, but there is a mind bending disregard for collateral damage in the pursuit of a suspect. It wouldn’t be so bad if Scott didn’t focus on the cars full of innocent people flying around in the air like Tonka toys because Washington took a wrong turn in a Humvee and then no-one gave a shit that he probably just wiped out a family full of Nuns (I don’t know what a collective of Nuns is? A gaggle?) and God knows who else. I’m not saying I don’t like explody crashes and high octane drama. It’s just if I am thinking about this stuff when you’re doing it, then something’s gone wrong.

It’s a shame because this is the second Tony Scott movie I have seen since his death that I hadn’t seen before and it is eroding the fond memories I had for his popcorn cinema. I loved Man on Fire, True Romance, Enemy of the State, The Fan, The Last Boyscout and of course Top Gun. But it seems like in his last few years with Deja Vu, Pelham and Unstoppable he was losing his touch for making silly but coherent and entertaining action movies.  I need to go back and watch some of his older offerings to restore my love for his talent.

Conclusion: Someone needs to send me back in time so I can stop myself from watching this movie.