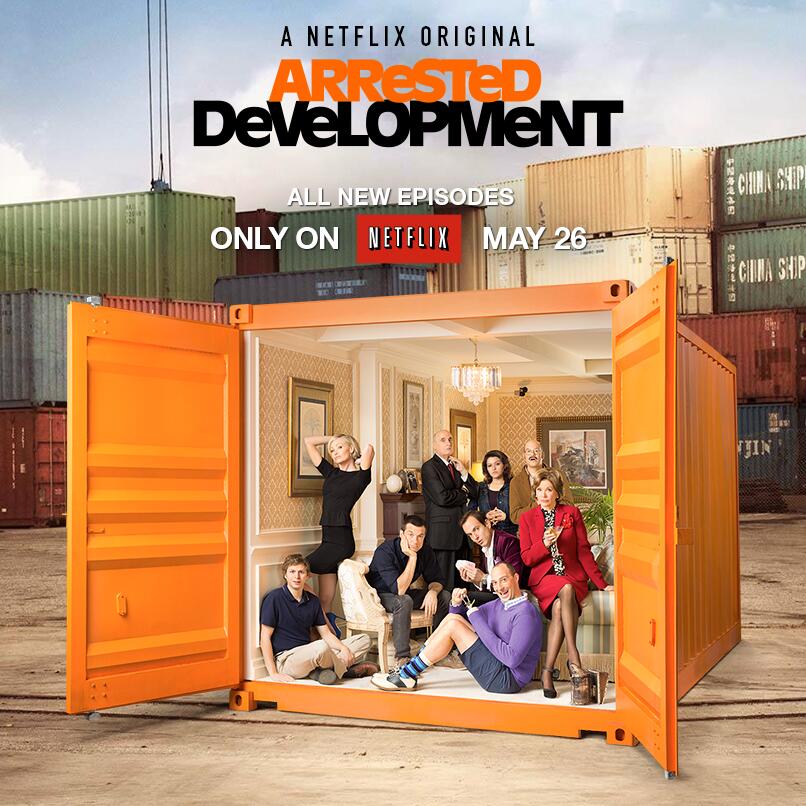 Network: Arrested Development is Netflix’s latest original production, although not entirely their own having originally been famously cancelled after three seasons on Fox.

Netflix is on a streak that other networks could only dream of. Season 4 of Arrested Development marks their third foray into original, streaming only content. Although, in fairness, Arrested Development is only really semi-original having been resurrected by Netflix 7 years after being scandalously cancelled by Fox. It is also, according to early figures, their biggest hit surpassing their first release, the sumptuously entertaining House of Cards (our full evaluation of which can be found here http://wp.me/p32hec-om).

Arrested Development is almost the perfect definition of cult classic television: adored by it’s fans; revered by it’s peers; endlessly memed; and, ultimately, killed in it’s prime by a studio focussed on the bottom line. Is there a studio better than Fox at cancelling cult shows? Think about it: Profit; Undeclared; Millenium; Futurama; The Tick; Family Guy (twice!); and Firefly. That, nerds, is quite the list.

Looking at how Netflix can save cancelled TV shows previously believed dead without chance of ever being brought back to life is something I’ll be looking at in more detail in a later article.

For now though I want to focus on the key question: was the revamped Arrested Development ultimately worth the 7 year wait?

In short, yes. Absolutely it was. Although I wasn’t feeling this confident after the first two episodes.

The folks at Arrested Development have never been short of ambition for their show. Their desire to stick two fingers up to popular convention and produce a 22 minute network comedy show with no laugh track;  an intricate web of in-jokes and references that sometimes didn’t pay off for several episodes; and was built around a family of unlikeable, narcissistic, self centred arseholes was both their genius and ultimately their undoing. They were the anti-Waltons. The anti-Bradys. And we loved them for it.

It was always written on the basis that it’s audience was as smart as it was and wanted to laugh without being spoonfed fart jokes. The problem was most people don’t watch a comedy to be challenged mentally, and as a consequence it didn’t keep the required numbers of people who will turn on a comedy show to have on in the background and keep the advertisers buying airtime. Things have changed nowadays and hits like 30 Rock, Community, Parks & Rec and Modern Family all owe a debt to Arrested Development for being ahead of it’s time and paying the price.

It was was with this in mind that I eagerly lined up season four as it was dropped into Netflix on May 26th and began to watch, tantalised by being reunited with Michael, Gob and co. And it was through the first hour or so that constitutes episodes 1 and 2 of series four though a number of things began to melt that huge sense of anticipatory joy that had accumulated in me like a ball of excitable pudding. 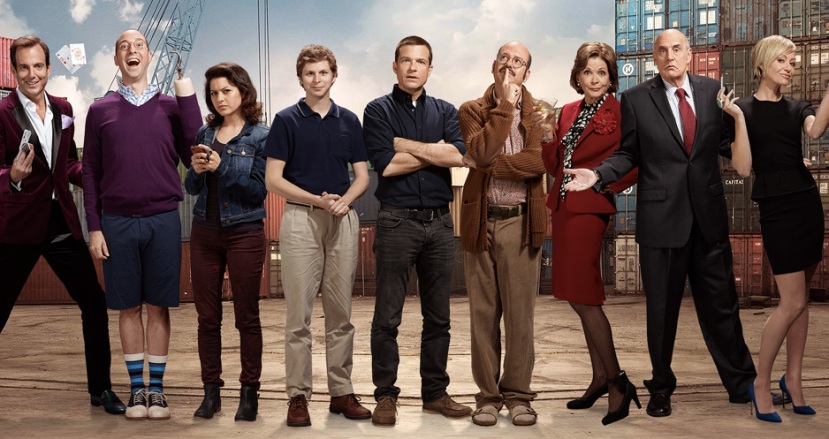 Firstly was the adjustment period of the actors being 7 years older than when they left. The issue is not so much with the actors having aged in that time; the current story is set in the present and as such doesn’t ask you to try and adjust to seeing the characters age overnight. It’s that since the shows cancellation the key cast, in particular Bateman, Arnett and Cera, have all become A-list Hollywood comedy actors. Watching them reprise their roles was like watching one of those weird episodes of a TV show where one of the characters who has gone off and become a big shot comes back and does a cameo. Or when old SNL alumni come back and guest host after conquering the movie business. Except it was the whole cast, and it was for the whole episode. The actors didn’t feel as synonymous with the characters as they did originally. I kept finding myself pulled out of the comedy because of it.

As a quick aside on this, Chris and I had a disagreement about Portia de Rossi’s face, an argument I had heard someone else have, but he hadn’t. There is no doubt she looks different that the clips from the original series, although still stupendously attractive, but I put it down to the passing of time. However it seems some people think she has had extensive work done to the point of it being distracting. He raised the point organically without provocation and so I am now thinking there is something in it. I am not convinced but I’d be interested to know whether anyone else has had this issue. Anyway, this is Hooray For Movies, not E! Back to the show.

The story in the first two episodes, and throughout the series as a whole in varying degrees, focusses on the period in between the end of season 3 in 2006 and today; a period referred to as “the dark time”. Lucille has been arrested for stealing the boat and fleeing the SEC and Michael is, as always trying to save the family. This time though he is also trying to make a movie of the family with Ron Howard based on an article Michael did in an in-flight magazine.

Unlike the original series though, where the whole cast featured fairly equally in each episode, here each episode was geared to be focussed on a different family member. Firstly Michael Bluth and then George Sr. While the other characters fleeted in and out there wasn’t the sense of an ensemble. Particularly as the characters all went their separate ways. There were some throwback references to previous memes and catchphrases, but they were mixed in with plot points and references that made no sense. I felt like I needed cliff notes. Had Christopher McQuarrie written this?

It seemed disjointed, not nearly as funny as I remembered and without the family focus that gave the original it’s charm. In a word it felt hollow. By the end of the first hour I was deflated and concerned. The huge sense of anticipation and joy that had accumulated in me began to melt like a big ball of warm pudding.

Then I got through to the end of episode 4 and it all began to make sense. The references, the disjointed feeling of all of the characters going their separate ways, volume of information thrown at me in the first hour, were all part of longer, complex, intertwining story. The first four episodes are there to set the scene. The following eleven begin to unravel the mysteries through playing the same scenes from multiple perspectives. Each time revealing something more telling until eventually you are left with the entire, brilliant, hilarious picture.

The writers saw a unique opportunity with Netflix in the way it releases content and took a calculated gamble. When all of the episodes are released at once you can spend two episodes setting up jokes, putting things in to place, because viewers don’t have to wait another week and lose interest. They can watch 2, 3, 4, 5 episodes in a sitting and get the payoff before they have a chance to get distracted with other things and lose patience/interest. It also means you can layer more titbits and plot points because the viewer has to retain it for less time before the pay off. Netflix is the perfect platform for their brand of comedy writing.

With each episode focussing on a different character there are definitely stronger episodes than others. This is more likely to do with whether you have favourite characters than anything else. Although I would argue that regardless most people will find the Lindsey storyline kind of dull, compared to the George Michael, Gob and Tobias episodes which are hilarious and more interesting.

The Ron Howard self referential story had a weird, jarring snake-eating-itself feel to it at first. Coupled with the volume of star cameos they had in the first few episodes my brain started thinking “uh-oh this is going to be one long, hey aren’t we great, look at all our celebrity friends, comedy star-fuck”. But that soon calmed down and the Ron Howard story line came in to it’s own. In fact by the end I loved Ron Howard playing a dickhead version of himself (assuming he’s quite nice in real life and not a dickhead). The addition of Isla Fisher as a recurring character also worked well. She is both achingly adorable and genuinely quite funny. Of all the cameos, the one standout was Kristen Wiig as a young Lucille. Seth Rogen as a young George Sr though was a kind of meh… MTV have compliled a comprehensive list of their top 10 cameos in this series here http://geek-news.mtv.com/2013/05/28/top-10-arrested-development-season-4-cameos/.

It’s by no means perfect though and it doesn’t match the original series as yet for sheer joy. The central storyline wasn’t that interesting and at time it felt like it was trying too hard to nudge the viewer in the side and say “Seriously you guys. Fox. What a bunch of dicks! Am I right?”. We get it, they don’t know what they’re missing. Stop telling me so much.

All of the flaws though were masked by the sheer brilliance of an ambition of achieving a bigger picture that the writers have for the show. One that a conventional weekly episode release structure would never have had the patience for.

It was a work of cinematic narrative ambition stretched over 15, 30 minute episodes. And having watched the whole series I am still blown away by the complexities of the structure of it. The movie comes out sometime in the next 12 months and this felt like it was all building to that for another series to follow after.

If I have been vague on plot and storylines it is because no amount of explaining them will do them justice, or really make any sense. My plan now is to go back and re-watch the first three seasons again, then watch this fourth series again. I suggest you all do the same.