Last weekend one of my avid readers (and long time friend) Laura asked me a favour. She was intrigued by the new Hannibal TV show which received its premier in the UK a couple of weeks ago. But, being a big flowery wussbag she was worried it might be too scary. So, she turned to the opinion she trusts most on these things. Me.

Not one to leave a lady too much time to question her decision making process I jumped to it and watched the first two episodes. Here are my initial thoughts.

I am one of those people who don’t subscribe to the “Silence of the Lambs is the best Hannibal Lecter in the series” school of thought. I thought it was great, lets be clear about that. Anthony Hopkins’s performance is one of the most iconic of the last 40 years. No, of all of the many Lecter adaptations over the last 25 years. I just think Manhunter (1986) is the all round best of the bunch.

The relationship between WIlliam Petersen’s damaged, sensitive, driven FBI agent Will Graham and Brian Cox’s pudgy, middle aged incarcerated psychopath was far darker and more intense than the Clarice/Lecter dynamic in Silence of the Lambs. There is also something about the tone of the original which chills me to my core. It was one of Michael Mann’s early efforts but the well known fingerprints that would define his style in the years to come with Heat and Collateral are plain to see: the stark, harsh lighting; dark electro soundtrack; crumbling hero; vivid neo-industrial landscapes. While every Hannibal since has focused on the gothic tones of the Thomas Harris books, Mann took a different path that paid dividends.

Hannibal, the 2013 NBC original TV series, has decided to take similarly divergent tonal paths to it’s closest counterparts, notably Criminal Minds and Following, whilst maintaining a core TV serial police procedural element. Unlike Following it doesn’t rely, so far, on beautiful people getting out of scrapes in increasingly ridiculous ways in order to maintain it’s audience. And unlike Criminal Minds it is well written.

I love it. I am totally hooked. 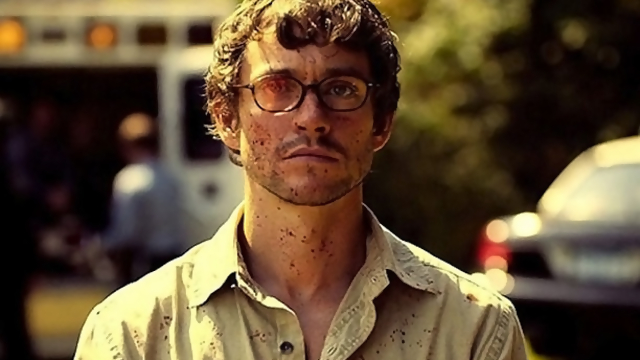 Like Manhunter the core relationship is between Will Graham, a highly damaged FBI Psychologist who suffers from hyper-active imagination and hyper-empathy issues, and Dr Lecter, a psychiatrist tasked with making sure Graham doesn’t go off the rails. At this point while we know what Lecter is all about, to everyone else he is the sound and rational voice of reason to a damaged, if somewhat prodigal, behavioural analyst. Together they assist the FBI’s Behavioural Analysis Unit (BAU) to catch the most dangerous and elusive serial killers.

The decision to make the relationship between Graham and Lecter one of deceptive friendship was a wise one because it allows more long term narrative latitude as Lecter struggles to keep his naturally homicidal instincts under wraps and Graham’s natural talent for spotting serial killers focuses on Lecter. It also creates a brilliant hero/anti-hero dynamic as Graham struggles with his demons and his desire to empathise with his subjects to the point of wanting to kill, while Lecter is his shoulder to cry on, all the while using him for inspiration.

The casting of the leads in particular is also a big win for the show. Mads Mikkelsen is a fabulous Lecter. Sharply dressed, icy cold stare, immaculately spoken. Never a wasted word, everything he says is calculated for to fit his own twisted plans. Physically he may be a million miles from Brian Cox’s Lecter in Manhunter, but like Cox his Lecter never feels Hammy like Hopkins’s. Anyone who has seen much of Mikkelsen’s work (most people will know him from Casino Royale) will know how intense he can be without much dialogue or expression.

Hugh Dancy is similarly great as Will Graham, channeling much of Will Petersen’s nervous energy from Manhunter. Another British actor making waves in American TV Dancy lets his tired eyes and scruffy beard portray most of the complexities of Graham’s borderline personality disorder that gives him his gift. I last saw him in the brilliant Martha Marcy May Marlene and thought he was a great piece of casting there as well. The current Mr Claire Danes is doing well for himself.

In these early stages the supporting cast also seem to be adequately fulfilling the various requisite TV police procedural roles well enough. Laurence Fishburne is always engaging and entertaining, although when he first walked in I thought there was going to be some weird CSI crossover from his time in the Las Vegas crime lab. Alas not.

One person at this table is most definitely not a vegetarian

Outside of that the final point I want to cover is the decision for NBC not to shy away from getting their hands dirty and not dialling down the gruesome. The opening few minutes are a beautifully shot visceral backtrack through a crime scene that defines the tone of the show well. The wounds of the victims are often shown in detail and in the second episode in particular the writers imagination shines through in a particularly awesome way that will put you off Shitake mushrooms for life.

Network TV has been losing to big Cable channels AMC, Showtime, HBO and now Netflix Original for gritty, hard hitting dramas that don’t have to worry about gore, nudity or profanity. And they’ve been winning because people love them some bloody boobies with the odd f-bomb thrown in for good measure. Networks are always going to be constrained by their advertisers but I am glad NBC have pushed it as hard as they can.

At the end of it the first two episodes of any TV show can be an inaccurate or misleading gauge for how a show will hold up over it’s lifetime. So many factors can have a bearing, not least how quickly the writers run out of compelling ideas. So far though this is one of the most enjoyable and compelling network shows I have seen in a while. It’s no House of Cards or Walking Dead, but as far as the big three (NBC, ABC and CBS) goes it is the best out there at the moment. I just hope that the powers that be don’t get itchy feet and scrap it before it’s time.