Synopsis: When Tony Stark’s world is torn apart by a formidable terrorist called the Mandarin (Ben Kingsley), he starts an odyssey of rebuilding and retribution

As I sat in the surprisingly only 2/3 full screening of Iron Man 3 last night, I realised how often I was drawing comparison with Dark knight Rises. Tonally they are chalk and cheese. Iron Man, and Marvel as a whole, has always been the softer tongue in cheek sibling to DC’s dark and brooding stable of characters. But there was something that felt familiar.

If Iron Man was about Stark battling with his new found power, and Iron Man 2 was about him battling with the inflated ego born of his new powers, then, much like The Dark Knight Rises, Iron Man 3 is about heroic men dealing with their absence of power, both physical and mental.

Also much like Dark Knight Rises, the film is as much about the absence of Stark in his suit as it is about Iron Man. The criticism of The Dark Knight Rises was it was a Batman film with hardly any Batman in it. The difference here is that, unlike Bruce Wayne, Tony Stark is a charismatic enough character to be entertaining for protracted periods away from the suit.

Firstly, we need to be clear on one thing. This may be called Iron Man 3, and it may technically be the third film to carry the name, but it is not the third part of the Tony Stark story. The unique situation that Iron Man 3 finds itself in is that the Avengers used so much of Iron Man that this is actually Iron Man 3.5 at the very least. In fact, and this is not a spoiler, the events of New York in The Avengers are more than referenced in Iron Man 3. Rather, they play a central role in the emotional DNA of Tony Stark. And certainly the arc of Iron Man will not end here as we all know, regardless of whether Iron Man 4 is a thing or not, he will be a key part of Avengers 2 and I would guess Avenger 3 (because who is going to stop that cash cow? Moo).

After the scaled back, understated Jeff Bridges double crossing baddie, and the slightly misjudged Micky Rourke Ivan Vanko, Iron Man’s new nemesis comes in the form of enigmatic super terrorist The Mandarin, a man hellbent on resetting the balance of power. In order to do so he utilises a terrifying new form of biological weapon to strike fear into his enemy, The United States. And, as with Bane in The Dark Knight Rises, the power he wields over his target leaves you feeling it could genuinely destroy Stark and the world around him. Sir Ben Kingsley hams it up just enough during the whole film to leave you in no doubt he is a super villain, but, as with all super-villains, that behind the monster lay a vulnerable man.

Trilogies are a tricky business. Often they happen by accident, born from the unexpected success of the first and the financially inevitable sequel. Following the three act model you can’t leave it at two and so the third part is a given at that point, unless the second is so bad it destroys your franchise.

Historically in the great cinematic trilogies the second movie has always been the strongest; By the time the writers, actors, producers etc get around to the second they feel more confident with their material. They have an established audience and an established character. As such they can spend less time exploring the macro of character’s world and more time focussing on a specific conflict. Second acts always tend to be the darkest as this is where protagonists find themselves at their lowest before finding redemption and resolution in the third act. The Dark Knight; Godfather II; Spiderman 2; Bourne Supremacy. All fit this mould.

Iron Man 2 though fell into the other side of the camp. That brand of sequels where confidence turns into hubris and complacency. Don’t misunderstand me, I really enjoyed Iron Man 2. It was big dumb fun. But there was something lacking. Tony Stark is Robert Downey Jr, and visa versa. Both can be brilliantly witty and their charm is in their super confidence. But left to go unchecked and it turns into smugness. It lacked heart and humanity and felt a little stale in comparison to the unexpected brilliance of the first. The action was to disconnected from the men inside the suits.

So, maybe unsurprisingly, unlike it’s superhero franchise counterparts (Batman; Spiderman) the third Iron Man outing is actually the strongest of the trilogy. In fact it is probably the strongest of all of the Marvel movies so far.

Robert Downey Jr is now synonymous with Iron Man. Fine, he has Sherlock Holmes in his back pocket as well, but no where near the levels of Iron Man. Like I said, left unchecked a little too much Downey Jr can come through and that charm turns to smug. But here the vulnerability of Stark is allowed to shine through as he is forced to think about what is most important to him and fight for it with tooth and nail (and big bad ass giant metal suit). There is also well crafted relationship with a young boy in the second act that, in less capable hands, could have become twee. But here it is injected with the level of wit and sarcasm you would expect from a Shane Black script and delivered with just enough Downey Jr snark to keep it from being over sentimental.

Don Cheadle is great, as he always is, as Col James Rhodes a.k.a. War Machine. It remains an excellent call on someone’s part to replace Terrence Howard with Cheadle. Howard is a fine actor, but Cheadle’s got the comedy chops. There is also a brilliant buddy chemistry between him and Downey Jr that has to be credited in large part to Shane Black. He is the king of the buddy action comedydynamic and it shows here as the dialogue crackles between them. I for one would love to see War Machine get introduced as a character in Avengers 2.

As I mentioned earlier Sir Ben does a fine hammy performance as The Mandarin. But it is Guy Pearce as the super genius with a chip on his shoulder Aldrich Killian who really puts home the villainous performance. It is an interesting continued theme with big superhero movies that when you get to 2 or 3 they naturally feel like they need to fight more than one super-villain. In Iron Man 3 though it never feels cluttered or that by focussing on so many elements they never focus on any. And that is one of the biggest wins for Black and his team.

Gwyneth Paltrow continues to be fine as Pepper Potts. As was already leaked before the release she does suit up at one point and it is interesting to see Paltrow handle action sequences. To be honest I have never been a fan of her or her work and I am sure there are plenty of other actresses who would have done just as well with the role. Similarly Rebecca Hall as newcomer Maya Hansen does fine with a fairly small role. To be honest Iron Man has never been great for well rounded or interesting female roles with the exception of Scarlett Johansson’s Natasha Romanov. It’s a shame that they couldn’t find a way to bring her back in for Iron Man 3.

Jon Favreau deserves a mention in his returning role as Tony’s bodyguard, now Head of Security at Stark Industries, Happy Hogan. As the man responsible for bringing the first two movies to the screen it could have been easy for him to want a clean break and have no part of the third. But all credit to him for returning to put in a great comedy performance, including what has to be the Best Flashback Mullet of the Year as we are taken back to 1999 in the opening few minutes. 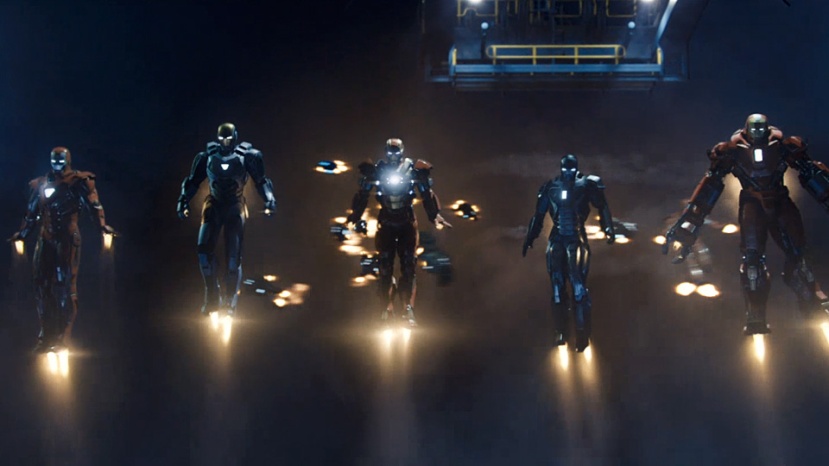 Behind the camera, Shane Black was a perfect choice to helm this and I wish that it had come sooner. His brand of slick action writing was a great fit for Tony Stark’s conflicting self involved playboy superhero God complex. Few can write one liners that don’t instantly feel forced and cheesy better than him. Writing a natural one liner is a skill that should not be underestimated.

His best works (Lethal Weapon, Last Boy Scout, Kiss Kiss Bang Bang) have all centred around strong yet broken men trying to fix things as a way of trying to fill the hole left by something traumatic, and doing so with overcompensating confidence and bravado. Few characters other than Tony Stark at this point in his arc could have been better matched to Black’s skill set.

Iron Man 3 was genuinely one of the funniest films I have seen in a long time at the cinema. I laughed out loud along with everyone else on multiple occasions. Black writes brilliantly self aware dialogue. One particularly fine moment sees a tied up Tony trying to scare the two goons holding him captive. The dialogue could have been lifted straight out of Lethal Weapon or Kiss Kiss Bang Bang.

Finally, a huge amount of credit has to go to WETA, Digital Domain and the stunt guys and gals. Iron Man 3 is stunningly pretty and flawlessly CGId. There are three or four big set pieces including a spectacular end 15 minutes where there is an onslaught of effects and stunts. This was Shane Black’s first time directing a blockbuster and given the weight of expectation he could have easily bottled it. When you sit through the credits for the trademark Marvel post credit easter egg, just take in for a minute the sheer number of people that worked on this project.

Conclusion: All in all this is the best of the Iron Man performances and probably the best of the Marvel movies yet. It certainly sets a very high bar for the Thor and Capt America sequels this year and sets a nice scene for Avengers 2 in 2015. If they keep playing one up with each other then we are all winners to be honest.

Director: Shane Black – Considered a pioneer writer of the action genre he set the standard for buddy movies in the 80’s and 90’s with Lethal Weapon and The Last Boy Scout. Made his directorial debut in 2005 with the brilliant Kiss Kiss, Bang Bang.