Synopsis: When an alcoholic (Will Ferrell) relapses, causing him to lose his wife and his job, he holds a yard sale on his front lawn in an attempt to start over. A new neighbour might be the key to his return to form.

One of Will Ferrell’s greatest qualities is also the one he utilises least; dude has a beautifully melancholic face. All too often his performances live at opposite ends of the spectrum, either total deadpan (Casa di ma Padre; Bewitched) or off the charts nutballs (Zoolander,Step Brothers). To be honest, his once funny brand of screechy voiced, man child delivery has gotten stale in recent years.

Then every once in a while he does something to remind you that, like so many of Hollywood’s greatest clowns before him, he is adept at melancholic performances more so than many of his peers. 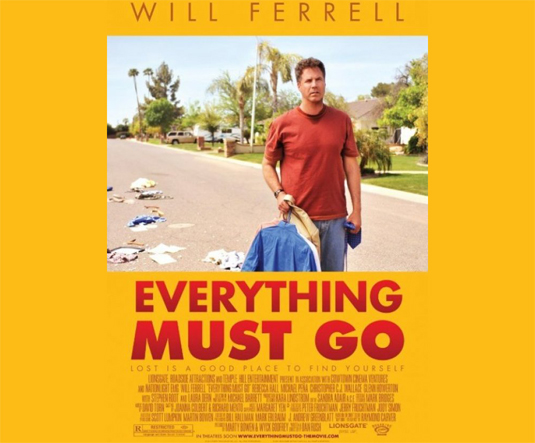 As a fan of his years on SNL and subsequent golden run of comedies (Zoolander, Old School, Anchorman) it saddens me when he brings something new out that I get a little less excited each time as my expectations pitch a little lower.

In 2006 I remember I was starting to lose love for Ferrell when I saw Stranger Than Fiction. I was astounded by how understated his performance was. I never knew he could be so restrained and use that big awkward frame of his for something so comedically gentle. That performance regained a lot of lost love at Shoving Buddies HQ and got him through Semi-Pro, Land of the Lost and Casa di ma Padre. It was with the latter though that I was at the end of my tether again. However, just as Stranger Than Fiction had done 7 years before it (holy crap, where did THAT time and all my hair go?!? Does time turn to fat? Because that would explain some stuff) Everything Must Go reminded me of just how great he can be when he stops trying so hard to be Will Ferrell.

Everything Must Go is a small and simple film about alcoholism and the process of cleansing and purging in order to start a fresh. After losing his job following what we understand to be a messy relapse on a business trip, Nick Halsey returns to his upper middle class Arizona home to find his wife gone and all of his possessions strewn lovelessly across his front lawn. His inability to let go of his stuff, and the often arbitrary value we place on material possessions in lieu of anything with truly emotional value, acts as an apt, if somewhat blunt, metaphor for the his cleansing process as he struggles with his addiction. The story takes place mostly in and around the front lawn that Nick occupies, unable to enter his home, and the succession of similarly flawed suburban characters that pass in and through his strange little world. As Nick points out; while he may live on his lawn he is no less normal than anyone else. He just doesn’t hide his flaws with walls.

Ferrell’s central performance is great and there is little humour in what he does, just a lot of sadness. While there were undoubtedly other actors who could probably have brought more intensity or gravitas to the role, there is something about watching a sad clown that gets me every time without fail. Adam Sandler did it in Punch Drunk Love. Jim Carrey certainly did it in Eternal Sunshine of the Spotless Mind.

The supporting cast are fine. Rebecca Hall feels a little wasted as the pregnant neighbour, as does Stephen Root as his not pregnant (spoiler alert) other neighbour. But it is a sweet performance from Christopher Jordan Wallace (son of Christopher “Biggie Smalls” Wallace) as the local latchkey kid who becomes Nick’s closest friend that leaves the greatest impression. 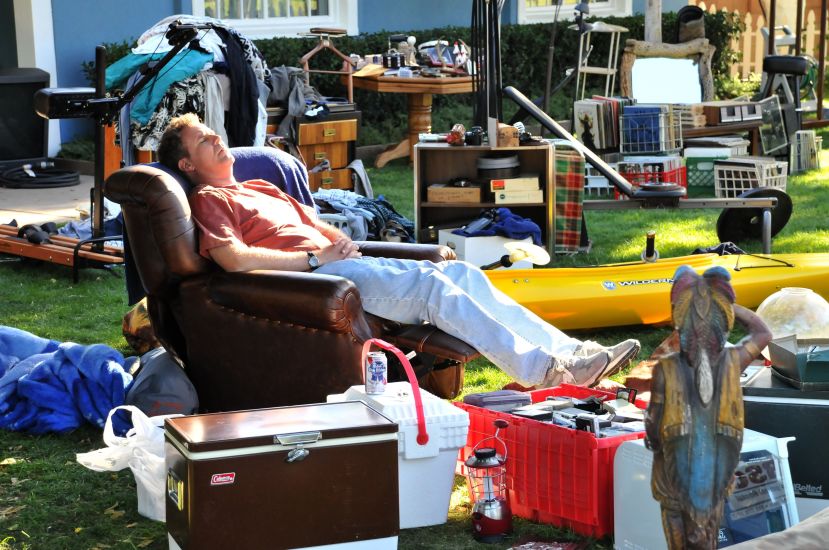 Admittedly it doesn’t always work and there are definitely moments where it probably needed someone who could command more of an emotional range than Ferrell. It is certainly not a performance on par with Stranger Than Fiction, but neither is it close in terms of a complete piece of work. What it is though is a sobering (sorry) reminder of how important it is to take stock of what we have and not let the things we own, own us, and that there is still an actor in Ferrell that needs to be released every now and then.

Conclusion: Go watch this in a triple bill with Eternal Sunshine Of The Spotless Mind and Stranger Than Fiction. A fine, if ultimately fairly forgettable, portrayal of addiction and metaphor for replacing quality of stuff with quality of life.

Writer: Dan Rush (screenplay) from the short story “Why Don’t You Dance?” by Raymond Carver