Synopsis: Francis “Frank” Underwood is the Democratic Congress Majority Whip. He has his hands on every secret in politics – and he’s willing to use them all to get what he wants.

Network: House of Cards is Netflix’s flagship original production. They are also producing the new series of Arrested Development and an Eli Roth supernatural thriller show called Hemlock Grove. Producing shows of this quality without concern for using networks and the constraints that come with them could make Netflix the next HBO.

I think I just witnessed the future of television. Twenty years or so ago when HBO broke the mould by offering an additional cable subscription channel they were able to pump money into developing an astonishing back catalogue of original programming. Without the constraints of watering down language, sex and violence to appease networks and advertisers they were able to let writers and directors produce cinematic quality television programming and set a standard that only Showtime have recently started to come close to. Sustaining that level of output for this long is unprecedented.

But, just as the music and film industry found before them, the economics of how people absorb their media is changing. Three things have become abundantly clear in the wake of cheap, all you can eat high speed broadband; people know what they want, they want it right this very second and they want as much or as little at any one time as they feel like. While everyone within the industry knows which way the tide is turning, Netflix are the first online service to provide a platform for streaming first, original content. Just like HBO before them, they have an audience who have paid a subscription to access their content and their customers are the only ones they have to answer to. It’s the HBO model for the high speed broadband, instant access generation.

As a starter for 10 House of Cards is a pretty stunning way to make your mark. This is no shabby, toe dip in the water, see how it goes venture. Oh no. House of Cards is a statement of intent. Consider those involved in bringing the whole thing to the screen: David Fincher, Kevin Spacey, James Foley, Alan Coulter, Joel Schumacher, Andrew Davies. These are heavyweights in their industry. None of that means anything though if the end product is a quality no-show. So the big question, does it hold up as a piece of entertainment? 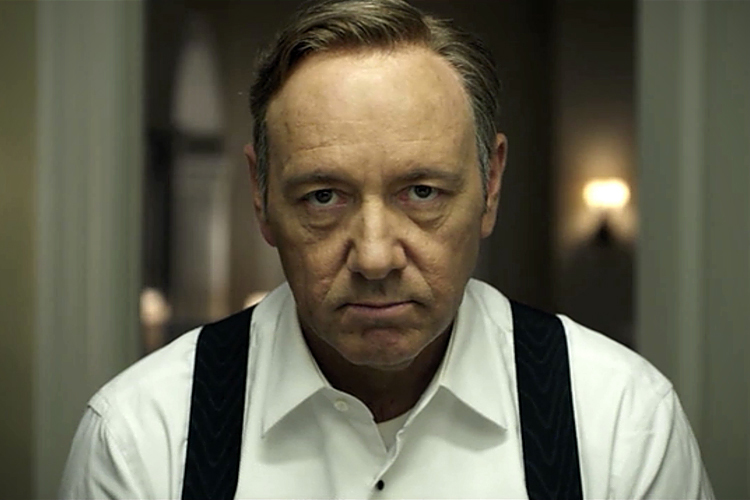 The story is based on a 23 year old British BBC series which followed a British politician in the Houses Of Parliament, which was itself based on a series of books by Michael Dobbs. Updated and moved to 2013 Washington the American version strings the original 4 episodes into 13 with an open end for a second series due at the beginning of next year. Kevin Spacey plays Francis “Frank” Underwood, a South Carolinian Congressman and Chief Whip. When the new President is elected to office Underwood is expecting his loyalty to be repaid with a lofty of office of power in the new Administration. However, when the promise is not followed through on he makes it a secret personal mission to use every secret and method at his disposal to get what he wants. By any means necessary.

It’s basically Swimming With Sharks filtered through the West Wing. Kevin Spacey is never better than when he is playing a smiling snake. His iconic roles have all been built on his ability to make you trust his smile while he stabs you in the back or steals your wallet. You know when he smiles, whether he is being genuine or not, you’re fucked. Somehow, somewhere, now or next year. You’re fucked. He did it as John Doe in Se7en. He did it as Kaiser Soze in the Usual Suspects. He did it as Buddy Ackerman in Swimming With Sharks. Frank Underwood deserves to be amongst those characters in terms of his best work.

Now, I have watched a lot of television. I never channel hop. I watch a tiny amount of “reality TV” but only on History, Nat Geo and Discovery. I almost exclusively dedicate my time to TV series’ that have to keep my attention and make me want to have to watch the next episode. The Sopranos. The West Wing. Boardwalk Empire. The Shield. The Wore. Six Feet Under. My frame of reference for what I know I like is broad and well honed. Which makes what I am about to say all the more resonant.

House of Cards is the best first series of any television programme I have ever watched. That’s not to say over the course of it’s life span it will be the best series I have ever watched. That distinction goes to The West Wing and it will take something of stellar quality to oust that from it’s current top spot. But, pound for pound, punch for punch, line for line, twist for twist, compared to the first series of any other TV show I have watched, none had the production quality or self assurance of House of Cards. That is the reward of working in a system that allows you almost complete freedom to do what you want, how you want and just give it away in one go to those who pay for your service. Whether they watch it an episode a week, all in one go or in bursts of multiple episodes (that’s how I did it, normally only the need for sleep kept me from hitting “next” on my iPad), it makes no odds to Netflix. Just as long as you watch it.

Hollywood loves to write about Washington. It’s the only place away from it’s own backyard that feels completely alien to most people. The corridors of power have always been a source of inspiration for backstabbing, double crossing, duplicitous, power mad characters. Frank Underwood could have come straight from the quill of Shakespeare. A man hellbent on seeking revenge on those he has seen as wronged him. Everyone is fair game. No methods or means are off the table. He trusts no-one except his closest advisor. Every person with whom he strikes a new relationship is only ever a pawn in his long game. An affair is never just an affair. If he seems to be helping someone you know he’s not. The joy is in trying to work out for what purpose he is using them. Relationships and events are never accidental. He makes Machiavelli look like a kindergarten teacher. The writers also use a favourite Shakespearean tool by breaking the fourth wall, with Spacey addressing the audience, sometimes with a glance, sometimes with exposition. The dialogue in those moments sometimes feels forced and over-written (pot kettle, I get it) but it often provides a poetic insight into his thought process.

Robin Wright is as equally impressive and suspicious as his wife, Claire. Highly educated, fiercely driven, maddeningly passive-aggressive. Never less than a picture of stoicism in a well cut dress. She plays the doting wife in so much as she willingly supports Frank in achieving his end game. While the details of that are never spoken of, she is willing to do what it takes to help him. As long as, that is, it doesn’t interfere with her own ambitions. House of Cards is, at it’s core, a show about ambition and power and every character embodies blind ambition. Arguably politics is nothing more than the same.

While a lot of credit goes to the performances of the leads, the success of the whole show is definitely an ensemble achievement. The supporting players around Spacey and Wright are all equally captivating and play their parts well. Michael Kelly is fantastic as Underwood’s softly spoken Lieutenant, dispatched to do the things Underwood can’t be seen to. Outside of the two leads though no-one is better than Corey Stoll as the hapless, alcoholic, whoring Junior Congressman Peter Russo. You start off thinking he is going to be this giant douchebag but he quickly becomes this sad, complex pawn in Underwood’s greater scheme. You know where he is being led, you see his false hope, and you are helpless to change his path.  One of the great things about the show, for me, was how strong and equally as driven and ambitious the female characters were. In a political world often still portrayed as rich white men making deals in smoke filled drawing rooms, Kate Mara’s journalist is willing to suck, screw and double cross her way to a story.

Like I say, Netflix wanted to make a statement and House of Cards is their flagship show. Maybe everything they do won’t have a David Fincher behind it or star a Kevin Spacey. Then again maybe it will. All I know for sure is House of Cards did and I reaped the rewards as a fan of cinematic television. The only way it could have been better was if Aaron Sorkin was scribing it. That said, one of the traits of House of Cards is it’s slow methodical pace matches the southern drawl and careful plodding of Frank Underwood’s fiendish scheming. Sorkin’s fast paced writing style may have jarred with that. Still, I’d like to have seen it tried.

It’ll be interesting to see if House of Cards manages to keep up this level of quality and if more broadly Netflix can keep up this level of output. It’ll also be interesting to see if any of the other streaming services follow suit. Netflix seems to be the best positioned to do so and certainly has the subscriber base (27 million) that outstrips it’s competitors. But, if this truly is the beginning of a revolution in the way TV and film is distributed then you can bet everyone will be doing it soon. Which means competition for ratings. Which is only ever a good thing for the rest of us.