Synopsis: Tim Lippe (Ed Helms) has no idea what he’s in for when he’s sent to Cedar Rapids, Iowa to represent his company at an annual insurance convention, where he soon finds himself under the “guidance” of three convention veterans.

I remember reading about Cedar Rapids when it got official selection at Sundance but it kind of passed the UK market by, taking only £146,000. At the time I was intrigued. It had John C Reilly in it, which is normally enough to get me to watch anything. Secondly it was directed by Miguel Arteta who has a small indie back catalogue of films I enjoyed immensly, most recently Youth In Revolt. But it got hardly any cinema releases and I forgot all about it. Then when researching Wreck-It Ralph for that review I came to realise one of the key writers, Phil Johnston, was also the writer of Cedar Rapids. My reaction was something akin to “ohhhhhh yeeeeaahhhh I remember wanting to see that. I wonder if it was actually any good?”. Thanks to Sky Movies I was able to find out. 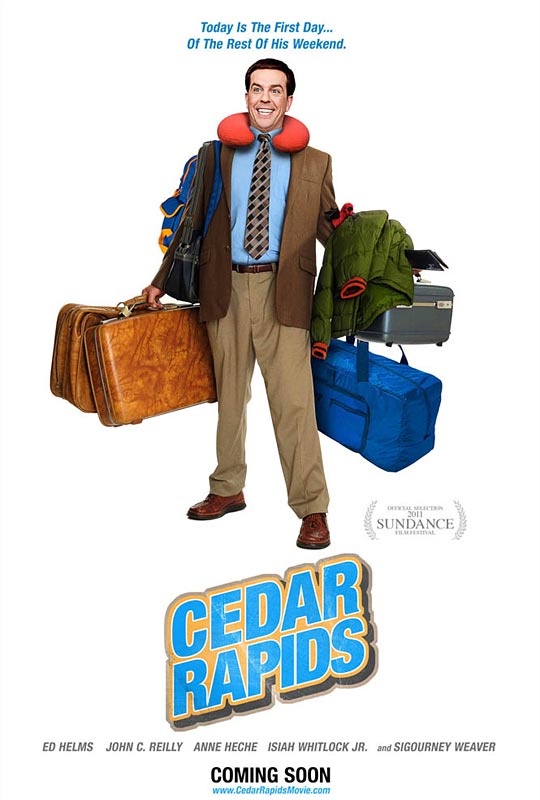 This is a controversial statement to make in the UK. It’s the kind of thing that makes old ladies drop their tea cups. But screw it, here goes nothing. I prefer the US Office to the original UK Office. Now before I get lynched or renditioned to an MI6 blacksite let me contextualise that. It’s not that I didn’t love the original, I loooooooooooooved the original. But with the US Office going into it’s 7th season here it has a significant advantage over the 15 or so UK episodes, in that it has had time to develop it’s characters and their relationships whilst remaining true to the basics of the UK framework.

One of the best characters on that show is far and away Andy Bernard. Ed Helms is creating a nice little niche for wide eyed, innocent, naive characters who have a knack for missing their moment. In Cedar Rapids he essentially transfers Andy Bernard to a different location for an hour and a half. With more swearing. And Anne Heche boob. And that is no bad thing. Cedar Rapids had me laughing like a hyena with Tourettes. There is something classically funny about the fish out of water story and Ed Helms has a genuine lost puppy quality.

Like all good odd couple/fish out of water stories the innocent lead needs to be surrounded with characters aching to destroy their innocence and bring them into the cynical real world. The trio of John C Reilly, Anne Heche and Isiah Whitlock bring a whole world of filthy, foul  mouthed hijinks for Helms’ Tim. I loved the fact that a MidWestern Small to Medium Insurers Conference was the backdrop for adultery, drug abuse, crack-hookers, corruption, karaoke and Anne Heche’s boobs. It had a real Office Space quality to it.

John C Reilly in particular is awesome as loud mouthed, drunk, party animal Dean Ziegler. Stand out scene; pool-time spaceman “sharing a special moment”. Also watching Ali Shawkat a.k.a. Maebe from Arrested Development, as the local hooker made me excited for more Arrested Development. She was great on that show and great in this.

All in all a gem that I am glad I stumbled across again and finally got around to watching. If you like Youth In Revolt, Juno or any of the similar recent indie comedies that have sprung up in the last 6 or 7 years then I would highly recommend Cedar Rapids.

Taglines: Today is the first day…..of the rest of his weekend

On DVD, BluRay and Sky Movies