The story follows Dusty, a yoga instructor from Colorado, who is on a desperate rescue mission to save her crazy brother Derek, a conspiracy theorist who is convinced Osama bin Laden is still alive, despite having been buried at sea. In Afghanistan, Dusty falls in with a team of NATO special forces on a secret assignment. Turns out Derek is not so crazy after all, and that Osama has returned from his watery grave and is making an army of zombie terrorists. When the group crashes headlong into the growing zombie apocalypse, Dusty and the troops must find and destroy the root of the zombie insurgency before it infests the rest of the world.

Why would you watch this the morning after:

When I was sat this morning nursing my hangover and looking for something to replace the dull throbbing in my head I knew I needed something dumb, noisy and silly. So when I saw Osombie: The Axis of Evil Dead there was no way I was not going to watch this. A film about Osama Bin Laden coming back as a zombie and raising an army of living dead insurgents had to meet my criteria. 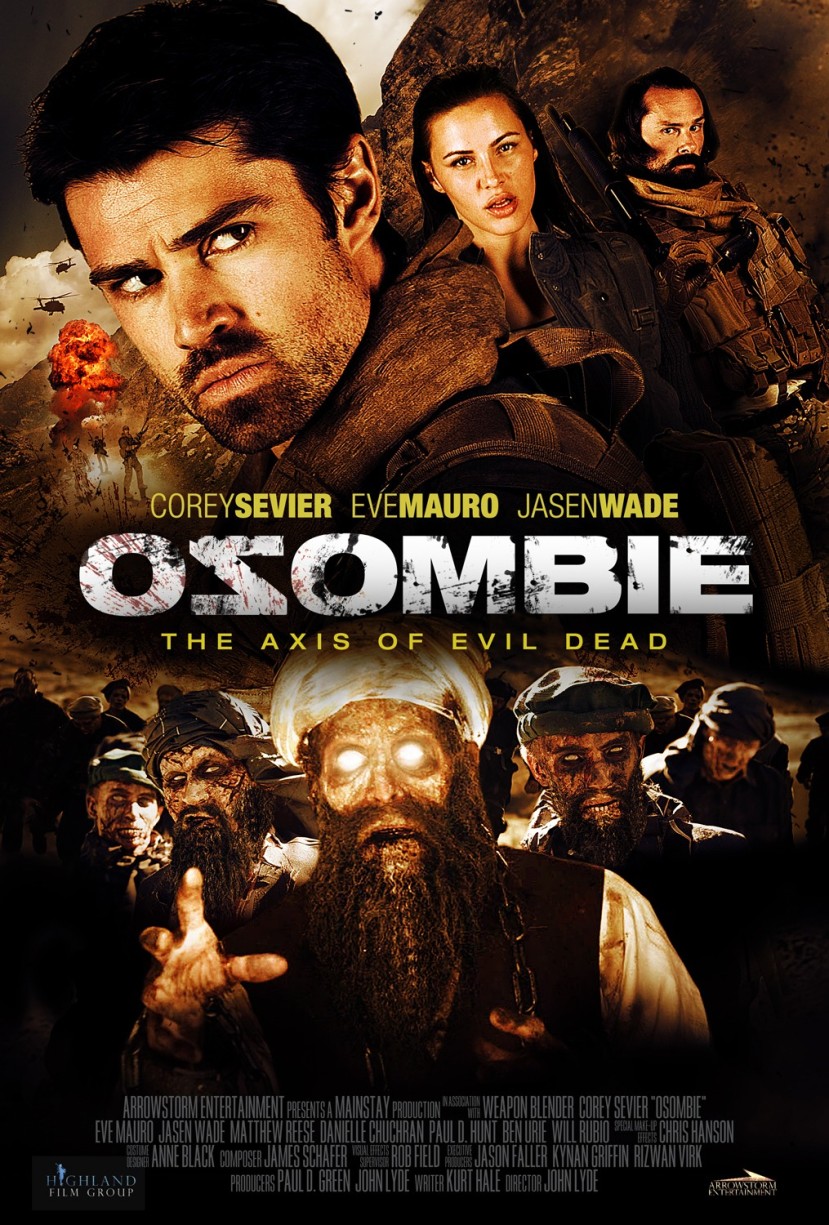 Major world events always tend to generate multiple movies that approach the subject matter from different angles. For instance the hunt for and killing of Osama Bin Laden has given us a number of films in recent months. Zero Dark Thirty (as reviewed on here last week) took a detailed, high budget, high brow look at the long CIA intelligence operation. Geronimo was an all action, no substance action movie about the Abbottobad raid. And then you have Osombie, which deals with the question no one has ever asked. What if Bin Laden infected himself to come back as a zombie and raise an army of undead insurgents?

This film is ridiculous. Reviewing it feels a bit like kicking a puppy. It can’t help being so feeble, that’s just the way it was made. This is an ultimate B-Movie in the same vein as the Mega Shark vs Mega Octopus type B-Movies. Terrible effects, worse acting. As I was watching it I remember thinking the pitch must have gone something like this:

Director (to prospective financers): We open on the Seal Team Six sweeping in to Abbottobad through the Pakistani night. They hit the compound. We see them breach through a door. A bearded figure bolts up right at the noise. It’s….Osama Bin Laden.

Director: But wait…there’s more. The Navy Seals sweep into a long corridor full of storage lockers. There’s a weird toxic symbol on one of them. A hand pulls a lever and the doors open. Suddenly the Navy Seals are confronted with at least….6 zombies.

Prospective Financers: Are any of them Osama Bin Laden?

Prospective Financers: Then we have ourselves a movie. Here’s $40.

In fairness the first 2 minutes are ok as a team of Navy Seals raid the compound. Then they reach he corridor with the storage lockers with all the zombies and it is all downhill from there. After they kill the zombies and Bin Laden is at the end of the corridor it suddenly turns into Scooby Doo and the Hunt For Bin Laden. He does this double take dash up the stairs. When he gets captured it wouldn’t have felt out of place for them to have taken his mask off and realised all this time the head of Al Qaeda and the world’s most wanted man was ACTUALLY the janitor. And he’d gotten away with it too if it wasn’t for those pesky kids.

In actual fact the premise is that he has developed a serum to raise the dead as zombies and before getting captured he injects himself ensuring he’ll come back when they shoot him. Once they capture and kill him they are in the process of transporting him in the helicopter out to sea when he comes back to life, causes the helicopter to crash and then he falls into the ocean. From there he finds his way back to Afghanistan (via California apparently as the next scene involves him attacking two young attractive Americans on a beach) and raises his undead army.

The cast is classic B-Movie. Most of them can act a little. One of them, a British guy, is the worst actor I have ever seen. He has the screen presence of a wet fart and couldn’t deliver a line if he had the right address and appropriate postage. At one point he has to deliver a monologue, which is brilliant because you can actually see him remembering his lines and most of the time the camera is focussed on something else. I imagine because he ended up having to actually read it from the script while they recorded the dialogue.

There is a lot of smell the fart acting. The lead dude is totally Joey Tribbiani. He’s not a good actor. But he does have great pecs. Which is lucky for him because whenever he acted his way into a corner the film makers would engineer a reason for him to take his shirt off. Not even that creatively. They just make his character someone who likes taking his shirt off in unnecessary circumstances. He might not be able to act but he has great hair. Also, according to his IMDB page he voted most likely to get to Hollywood in high school. So between that and his pecs he’s doing alright. Good for him.

Most disappointingly though is you don’t see much of zombie Bin Laden. And the zombies are about as scary as monkey in a butler’s outfit.

Almost all of it. One particularly terrible moment though goes like this: following an ambush on their squadron the British dude gets bitten and they know they’ll have to kill him. Token female soldier kisses him and utters the terrible line “I was supposed to have your babies”. Once dead we then get 45 seconds of her essentially standing in shadow expressing her feelings through the medium of interpretative dance. Terrible. Just terrible.

Thing is with a film like this you could write a paragraph on the ridiculousness of each scene, but that’s not in the spirit of the film. It’s a stupid film with a B-Movie premise, cast and budget. I wouldn’t recommend watching it unless you have morbid curiosity about what a movie about Osama Bin Laden coming back as a zombie looks like.

Release Date: 2012 (Release date in this instance is whenever it hit the bargain bin at your local petrol station)

Director: John Lyde – Done a lot of stuff, none of which I’ve seen and all of which looks awful

Written By: This thing had a writer?

Categories: Action, Horror, Movies, The Morning After The Night Before (TMATNB)