When my computer spat this one out as the third Retro Streaming feature for me to watch and critique I couldn’t help but cringe and groan a little. I know that the point of this is I can end up watching pretty much anything and there is a good chance I will end up watching something at best dull and at worst toe curling. And that’s fine, I have no problem with that. If I did I wouldn’t have started this whole ridiculously fun adventure.

It’s just I had previously avoided Jonah Hex for some fairly specific reasons and made a promise to myself that I wouldn’t watch it come rain or shine. A promise I would now have to break, all in the name of this blog. You’re welcome World. 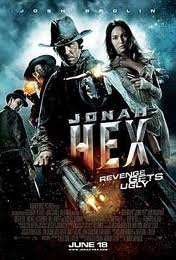 After I watched Jonah Hex and started thinking about what it was that bothered me so much I realised to fully cover it in this segment would be remiss. So I am going to supplement this with another article in the next couple of days about how Hollywood needs to better understand the importance of origin stories when adapting comic books for cinema. Instead I will focus here on the film itself and a little about just how this managed to flop so badly critically and commercially.

As I will cover in more detail in my later article Hollywood loves nothing more than to oversaturate the market when it feels like it’s onto a good thing. The world is currently going through a love in with comic books and graphic novel adaptations, so it’s no surprise that Jonah Hex got optioned and adapted. The film though, it has to be said, is based very loosely on the source material.

The story was adapted by Mark Neveldine and Brian Taylor whose previous efforts were Crank AND Crank 2: High Voltage as well as Gamer with Gerard “don’t look at my acting just focus on my pretty beard” Butler. WOOOOOOOWOOOOOOOWOOOOOOO!!!! What’s that? Oh yes, it’s the sound of the ALARM BELLS people should have been hearing when the team behind the Crank franchise were tasked with adapting a Steam-Punk Western story about a deeply conflicted character who is battling with such demons as his loyalty to the Confederate South while abhorring slavery during Civil War America.

Remarkably given the hyper-stylised and vacuous end product it was a surprise the writers Brian Taylor and Mark Neveldine were also attached to direct but left due to “artistic differences” with the studio. Playing fast and loose with the term “artistic” there are we internet forums? As such the studio moved it from one set of odd choice hands to another, albeit a singular pair, in Jimmy Hayward. Odd choice why? Well he’d only directed one thing before and that was animated Dr Seuss adaptation Horton Hears A Who. Not exactly a safe pair of hands to guide a troubled production to box office success.

Also can I pick up on something while I think about it. Mark Neveldine is credited purely as “Neveldine”. Note to Mark Neveldine: nothing makes you look more like a pretentious and arrogant wanker than being a skinny white guy who asks to only be credited by your last name. Stop taking tips from McG. I don’t know much about Jimmy Hayward but at least he uses his full name. Neveldine. What a dick.

On to the film itself and I gotta admit, I really hoped that all my prejudices about the film knowing it’s history and those responsible would be just that, prejudicial, and I would be proven wrong. So it was I settled down with my preconceptions placed to one side and blank slate in their place. Was I wrong?

Nope, it was as bad as I feared. Which made me sad as this should have been a great source novel for a Walking Dead style TV series on HBO or Showtime. Not a rushed, undercooked 81 minute Metallica music video. 81 minutes is really short for any cinematic release. You’d rarely write for less than 90 minutes. Which makes me think they shot this to be much longer and then when they came to edit, realised what they had an decided to cut huge chunks of story development to get through it as quickly as possible. Also there was some left over casting that felt weird and like their scenes ended up being cut in a huge cull. For instance Michael Shannon basically turns up as an extra. He is a well respected leading actor. You don’t cast him in a non-speaking role. He ends up as one because you cut his 15 minutes of scenes along with the other 75 minutes you had to get rid of.

It was so rushed that at times it was like someone was holding my hand and pulling me through the movie so I couldn’t stop and question anything. Like:

Me: “Wait how come he can talk to dead people by holding them?”

Film: “Don’t worry about that it’s not important, look at this big exploding wooden house over here”

Me: “What? Why is the house with no gas mains exploding like it was housing 10000 gallons of petrol?”

All in all it deserved it’s criticisms and I am unsurprised by how much of a commercial flop it was (it took $10m at the box office which is a stinker for a movie of this size). Fans of the source material will be horrified by the underdevelopment of Hex’s character. Those with no knowledge of the source material will just be confused by his ability to talk to dead people and his motivations for doing stuff outside of the “they killed my family” shtick, which is a minor part of his character in the grand scheme of things.

Hollywood take note: pick your writers carefully and know when to do TV and when to do cinema.

In addition here is what else I took from the 81 minutes I can’t get back:

Other Things I Noted

Tagline: Revenge Gets Ugly (as is the movie)

Director: Jimmy Hayward – Not known for much before this in terms of directing. His only previous effort was animated Dr Seus effort Horton Hears A Who. Cut his teeth in animation including Toy Story 2 and Finding Nemo.

1. Will Arnett (Gob Bluth on Arrested Development) as Lieutenant Grass